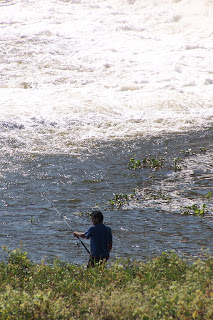 I'm here.  Blogging is on my back burner right now as I continue to sit with my mom in the hospital after school and on weekends.  She's been in the hospital just over four weeks now with a fractured neck.  She's still heavily medicated and not clear in her head about just about everything. It's grim but we are praying for a recovery and trying to make her as comfortable as possible.

Every now and then I just have to get out of there, though, for my own mental health.  Steve and I took the top off the Jeep today and drove down to Lock and Dam #5 on the Red River.  We like going down there and looking at the river and listening to the water.

It's a pretty spot and they've got it all fixed up with picnic tables and grills.  There are always people there fishing or just hanging out watching the water.  We've yet to catch it at a time when a boat is going through the locks but that would be very cool.  Maybe one day we'll hit it at the right time.  Steve likes watching the cranes and egrets (I guess that's what they are...).   It's just a relaxing spot.  Part of it is that I'm just drawn to water, I think. 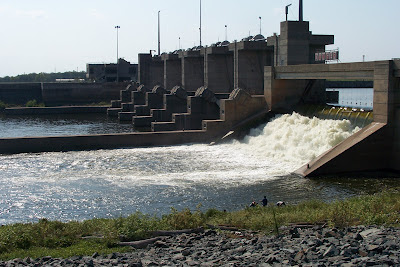 Today there were several families out there and lots of people fishing.  And look down in the bottom right corner of this picture:  there's a person swimming in that gross, stagnant looking pool off to the side. 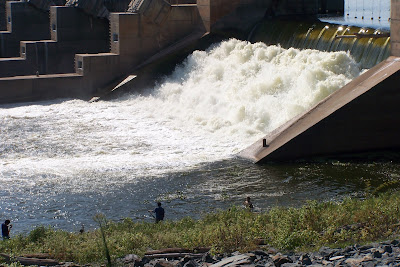 I'm not sure I'd have jumped in right there, ya know?  Looked dangerous to me, and all the algae and sticks drift off over there and just sit.  Gross.

I packed an Igloo with brats and potato salad, and some snacks, and we fired up one of the grills and fixed lunch.  I tried to remember everything, but you always forget something, I guess.  I forgot the paper plates.

But because we are so clever and resourceful, we made plates out of aluminum foil.  Guess which one is mine: 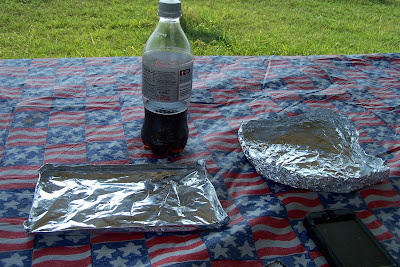 While we waited for the coals to get ready I walked down the rocks almost down to the river.  All these people fishing just stomp on down there like it's nothing, but I creep down the rocks slowly, searching tentatively for a sound foothold before taking each step.  One too many rolled ankles has made me less of a daredevil than I used to be. 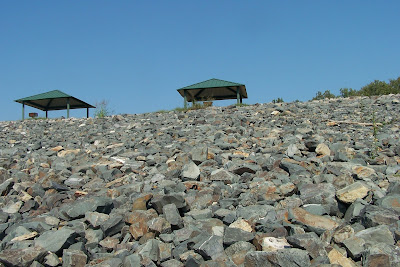 Coming up was much faster for some reason.

Weeds or flowers?  I thought they were cheerful, either way: 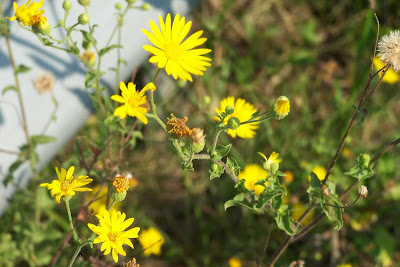 And then it was time to cook.  In honor of Oktoberfest kicking off this weekend in Munich, we opted for brats: 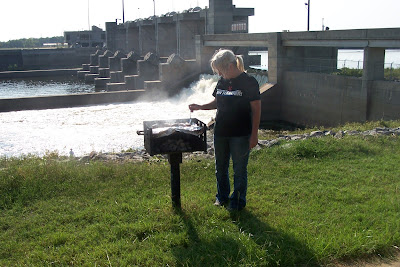 I guess they look a mess here, but they were pretty darn good: 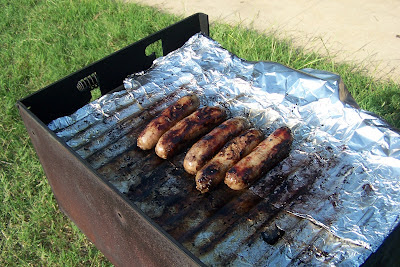 All doctored up and placed on my fine plate: 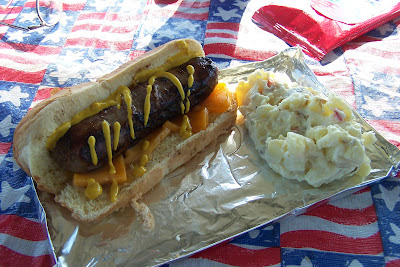 After we ate we doused the coals, cleaned out our grill, and climbed back in the Jeep to head toward Lake Bistineau.

Back in the day, some thirty-five years ago I guess, I used to go skiing on Lake Bistineau.  I had a friend with a 15-1/2 foot Glastron ski boat and I had my own O'brien ski and oh did we have fun on the lake!  Long summer days skiing all day, drinking a little beer, listening to some music, laughing and being young.

Boy was it ever depressing to see the lake now.  Good golly almighty.

Lake Bistineau has been battling a salvinia problem and it's just about killed the lake from what I can see.  I'm sure there are still some pretty spots on the lake but this is at Green Park: 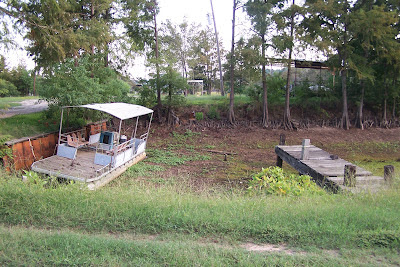 We saw one dilapidated, trashed out trailer after another on the roads around the lake and one dried up marina after another.

When my friends and I went skiing, we used to put in at Plum Orchard.  The pictures in my memory are very different from what is there now.  The road into the marina is still there; I remembered the big tree and the asphalt turn around, but the store was gone.  So was most of the water.  This is the boat ramp: 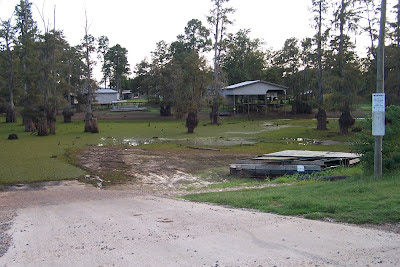 You can see where the water line used to be.  La. Dept of Wildlife and Fisheries is drawing the water down to help kill the salvinia:

In an effort to control aquatic vegetation, the water control structure on Lake Bistineau near Minden, La., will be opened on August 8, 2012, for a lake drawdown.
As a result of mild winter temperatures, giant salvinia has expanded beyond the control capacity of herbicide applications and salvinia weevils.  Louisiana Department of Wildlife and Fisheries survey estimates show giant salvinia coverage to be in excess of 2,000 acres.
The lake will be lowered 7 feet below pool stage and will remain lowered until January 31, 2013.

But from the looks of things, that marina died a long time ago.

I walked out on the pier and took this; this is the channel we took leading to the open lake (the sign says "No Wake"): 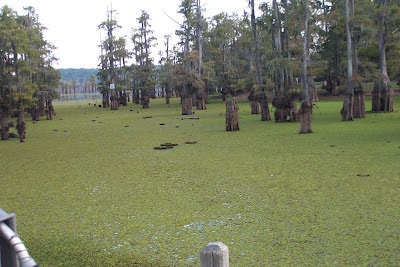 And this just made me sad: 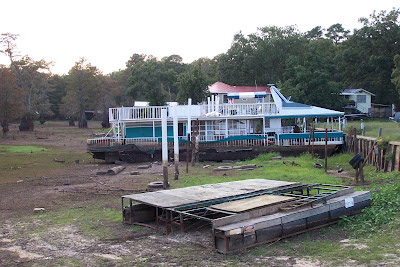 Really depressing.  Here is a history of the Lake Bistineau drawdowns; it's been controversial from day one.

At any rate, it was starting to get late so we headed back to town.  What I love about driving with the top down is that you can feel the cold pockets when you're driving down the road, you can smell the pines or a burning trash pile.  You can stop and visit with a fellow on the side of the road who is watering his goat.  (No, we really did.  "That's a prize goat!" he told us!)  We waved at old timers sitting on their porch in Doyline, and at a motorcycle group driving down Highway 80.  At a stop light in town I took this picture of birds on a wire and I wouldn't have been able to do that with a roof on my car! 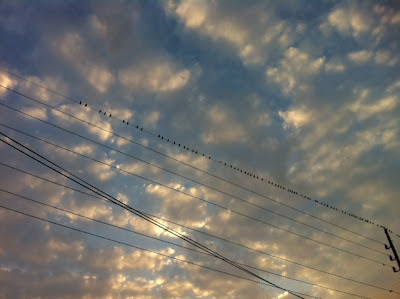 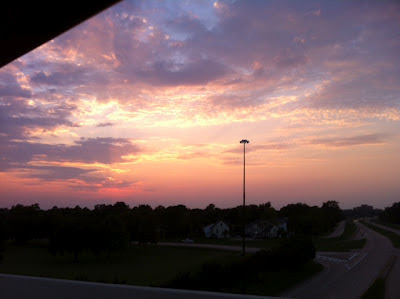 It was a nice, relaxing day.  Now on to the work week.

OK! So my "plate" doesn't look as fancy as yours. I told you I barely passed art in 2nd grade, so now maybe you'll believe me. I was going for the "reinforced" edges and corners. Yeah, that's it, reinforcement!

As for the goat, the guy did offer him to us. If I had a place to keep a pet goat I would. I like goats and they can make great pets.

I had a great time this weekend and this afternoon was especially fun.

I thought your plate looked fine, couldn't have done better myself. I'm not sure that is a compliment, but take it for what it's worth.

It has puzzled me that the government touted increased opportunities for recreation, such as fishing, as a key justification for funding billions for the Red River lock and damn system, yet they did not bother to install steps or some safe path for fishermen to get to the bank at the hot spot below the dam. Can anyone explain that?

Nope but I feel your pain. I've yet to get all the way to the bottom but I sat there and watched fishermen stomp all the way down like it was nothing. A path is definitely needed.