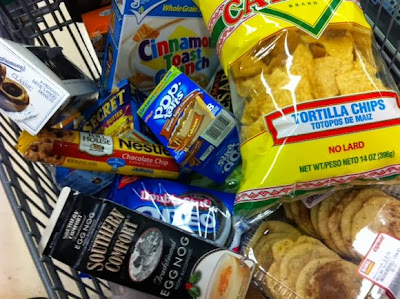 I haven't dipped my toes in the political pool for a while now, as you may have noticed.  I've become so disgusted with Republicans and Democrats alike; it's as if they've all thrown up their hands and decided to give up the fight and turn us into a third world country.  All the ranting and railing in the world hasn't stopped us from turning into a fast-food, service oriented country filled with a government-dependent-population too blind to see what has happened to them.

Going off the grid has never looked so good.

Case in point:  yesterday the EBT system went down for a while causing absolute panic in seventeen states.

My first clue that this was going on was yesterday, about 11, I went to my local grocery store to pick up some dog food.  The parking lot was near empty and I found a parking spot close to the front door.  Right inside the door was a sign that said the system was down and announced that the store could not process food stamp payments.

By the time I got home it had hit my Facebook and Twitter feed.  I used the search function on Twitter and ran "food stamps."  Oh.my.god.  Panic hardly describes it.  I was going to capture some of that mess but that's what Twitchy is for, so I didn't waste my time.  I honestly could not believe what I was reading as I thumbed through these tweets; everyone blamed it on the shutdown and everyone blamed the shutdown on the Republicans.  Riots and threats were predicted and panic was full blown.  The posts on Twitchy reflect a segment of what I saw yesterday.

The uneducated masses were all jumping to conclusions.  All the Republicans fault and it's all about the shutdown.  Neither of these assumptions were true.  And why is the first reaction to threaten riots?  Check your news sources, make some phone calls, find out the truth; why is the first response to go onto social media and threaten to start riots?

Jump to today.  I went back to the grocery store this morning (this time because I needed aluminum foil and ground beef.)  The parking lot was packed, the lines were long, and everybody was happy, happy, happy.  Except the cashiers, maybe.

What struck me about it, though, is what has been the subject of an ongoing debate about the food stamp program.  I have no way of knowing, of course, who was paying with food stamps and who wasn't, so this is all assumption, really.  But in these long checkout lines were baskets overflowing with Hot Pockets, frozen pizza, sugary sodas, sugary cereals, Little Debbies, chips, cookies, pop tarts, etc.  Little to no fruit or fresh vegetables.  Not much milk.  It was a quick, cursory glance - purely unscientific observation.  I give you that.  But we've all seen it.

It reminded me of the day Steve and I returned home from our summer vacation.  We'd been gone nearly two weeks and a stop by the grocery store was mandatory before we went home.  I was in line, watching the clerk scan my groceries and I was punchy-tired the way you get after ten hours in a car.  A young woman in line behind me had inched up into my personal space and was peering at my groceries with fascination.  When she saw the two packages of ribeye steaks come across she 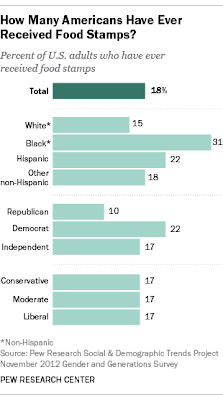 couldn't restrain herself any longer.

"What animal do that come from?!  Steaks!"

Curiously, I looked at her.  She truly wanted to know.  "Cows."

Yes, they are.  An indulgence that I don't do all the time.

When the clerk told me my total, just over $100, I slid my debit card and punched in my code.

"Y'alls get food stamps?"  the young woman asked, her gold tooth glittering as she grinned at me.

"Y'alls should gets food stamps!  That ways you don't have to pay for them groceries!"

It was too much in my current state of exhaustion.

"ooooooohh," she said, sadly.  "That's too bad."  She was shaking her head back and forth with a look of sadness on her face.

And yes, she had tattoos, a nice hair-do, and a full manicure.

All of which is to say this.  I don't begrudge helping the needy; truly, I don't.  I'm a charitable, giving person.  I understand why families were upset that they couldn't get groceries yesterday.

All the fuss yesterday seemed to be a foreshadowing of what is to come when this government finally goes broke, and it will.  The apocalypse is upon us.

And in the meantime, I suggest that there should also be food stamp reform.  It's beyond contradictory that Michelle Obama's main initiative is obesity and healthy eating when we continue to allow people with EBT cards to fill their carts (and their children) with preservatives, processed foods, and sugary crap:

A 2012 study found that food stamps enable about $2 billion worth of junk food purchases each year, and that more than half of the beverages bought using SNAP benefits are sugary drinks.


Representative Phil Roe (R-TN) proposed just such a bill in September, which of course, prompted the liberals to scream foul.  Roe's bill would model the SNAP program on the WIC program.


Roe’s bill would change the model for food stamps to that used by the Women, Infants, and Children (WIC) program, which provides food benefits for mothers with young children. WIC has significantly more restrictions on it, to ensure that mothers and children get sufficient calcium, grains, and fruit.


But the liberals, ironically, see it as a nanny-state move.  (That would be the same liberals who tell New Yorkers they can't have Big Gulps and trans-fats.)

Roe's bill doesn't even address that area of food stamp fraud where people sell their EBT cards for cash.  That was on Twitter, too, yesterday, and I know this exists.  Why do we live in a society where there is no shame whatsoever in boasting about how much money you get each month from the government for your groceries?  I remember when people used to be embarrassed about taking government handouts.

All in all it's enough to make me want to go off the grid.  What ever happened to self-reliance and independence?   The vitriol on Twitter yesterday also included demands from people not on food stamps for those who are to consider getting jobs and therefore not be dependent on the government.  Obviously there are some who can't do that.  But our politicians would be doing everyone a favor if they quit squabbling like petulant children and focus on job creation and restoring this economy rather than tearing the country apart.

And that includes Republicans.

And in a related story, from KSLA:


Shelves in Walmart stores in Springhill and Mansfield, LA were reportedly cleared Saturday night, when the stores allowed purchases on EBT cards even though they were not showing limits.

The chaos that followed ultimately required intervention from local police, and left behind numerous carts filled to overflowing, apparently abandoned when the glitch-spurred shopping frenzy ended.

Springhill Police Chief Will Lynd confirms they were called in to help the employees at Walmart because there were so many people clearing off the shelves. He says Walmart was so packed, "It was worse than any black Friday" that he's ever seen.

Lynd explained the cards weren't showing limits and they called corporate Walmart, whose spokesman  said to let the people use the cards anyway. From 7 to 9 p.m., people were loading up their carts, but when the cards began showing limits again around 9, one woman was detained because she rang up a bill of $700.00 and only had .49 on her card. She was held by police until corporate Walmart said they wouldn't press charges if she left the food.


And this from Rex Moncrief at Conservative Drink: 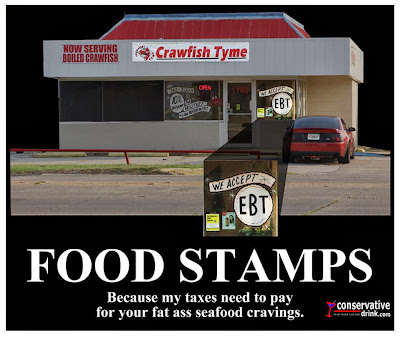 You have hit the nail on the head.
I am not against helping those in need, either. There is a big difference between helping someone with a legitimate need get over a rough spot in life and those running rampant with an entitlement mentality.
Third World Country Syndrome is definitely here.

Pat, I guess word gets around via ObamaPhones when The WalMart approves "no limits" on Louisiana Purchase cards!

Even if it's just for a couple of hours...

Pat, I guess word gets around via ObamaPhones when The WalMart approves "no limits" on Louisiana Purchase cards!

Even if it's just for a couple of hours...

Since these recent acts weren't isolated to one location and committed by a few "people" and similar acts have been comitted in the past, this is more typical than stereotypical.

"A 2012 study found that food stamps enable about $2 billion worth of junk food purchases each year..."

I have never known the kind of hunger that borders on starvation, but my work with alcoholics, including street people, has made me familiar with that issue. More familiar than I want to be, believe me.

That doesn't make it a good thing, but a great many people on food stamps are merely surviving as best they can. Be slow to judge.

Worse still, some beneficiaries of the public purse use their checks and EBT cards for cruises, lap dances, whiskey and beer.

Fraud is rampant. One muslim was caught with 4.5 million dollars worth of food stamps.

Food stamps are sold on Craigslist.

The children are still the last to see any benefit from the welfare culture.