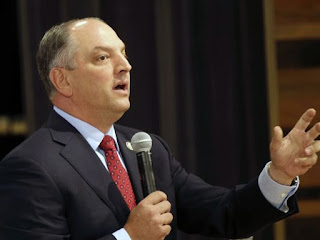 Here's a snip of my latest post at DaTechGuy blog:

When news broke this past Thursday that John Bel Edwards had halted all payments to the enormously popular college scholarship program, you could feel the panic and desperation throughout the state.

Thursday afternoon, February 11, word came down about the program via NOLA:

Gov. John Bel Edwards' budget chief, Jay Dardenne, said the state will have to leave TOPS approximately $28 million short of what it would take to fully fund the program through the end of the semester. He said all public universities will be informed that they would not receive all their TOPS payment this spring.

Dardenne added that TOPS could only be fully funded this year if the Legislature agreed to raise taxes a lot -- over a half a billion dollars -- in the next couple of months. Even then, the Edwards administration would likely prioritize filling a shortfall in the Medicaid program before the college scholarship program would receive the money it needs.

The TOPS program began in 1989 and, in brief, it pays college tuition to in-state universities for Louisiana students who score a certain percentage on the ACT and who maintain a certain GPA. The intent was to keep our kids here in the state. Through the years the requirements have been tweaked with the GPA requirement now at 2.5 and the ACT score now at 20. You can read more specifics here.

Now, there are a couple of things to look at in those two paragraphs from NOLA: first, Dardenne said basically that those students already enrolled in the spring semester are on the hook for the balance of the tuition they had been told would be paid through their scholarship. Literally what he said was that the colleges would “absorb” the cost of the unpaid balance. Recall that higher education throughout the state has already been decimated by Bobby Jindal and there is no room to “absorb” anything.

Students across the state went to bed Thursday night anticipating bills for the balances to hit their mailboxes any moment.

The second thing to note from that NOLA quote is that Dardenne indicated that even if the money to fund TOPS was found, it would instead go toward funding Medicaid rather than satisfying the promised TOPS debt.

Go to DaTechGuy to read the whole thing.

Everywhere I've been over the past few days you can hear worried, subdued conversations about the tax increases and the proposed cuts. Edwards has the entire state under emotional blackmail.

And now we have the race card. Can we just stop already with the racial division?

The Special Session has begun and it is already contentious.  Whatever lawmakers ultimately decide to do, you can be certain that you'll be paying higher taxes on everything, and new taxes on things you don't pay taxes on now, and that the TOPS program will be decimated with cuts up to 80%.

And worse. The deficit has grown an additional $17 million.
Posted by Pat Austin Becker at 12:35 PM

Pat blogging at my site is a real blessing. I'm delighted to have her