Dear Gallup: For WHAT is Obama Most Admired, Exactly? 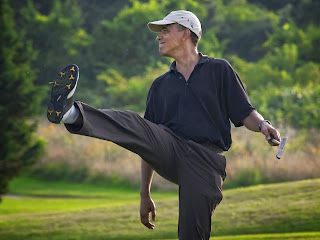 Gallup has issued the results of its annual poll of Most Admired men and women.

I find the results quite depressing and ominous for the future of the country.

My initial response after reading the list was "who in the hell answered this poll?  Where did they get these people?"  Apparently Gallup says that the respondents are equal parts cell phone users and land lines;  they are supposedly from all 50 states, and are all over age 18.  In short, it seems like a fair poll on the surface.  A total of 1031 adults were polled.

And the best we can do is Barack Obama and Hillary Clinton?  Seriously?

What, exactly, are we admiring Barack Obama for?  I'd be interested in a follow-up question to the Gallup respondents to see if they can cite one thing that these people did that are truly worth admiration.  Or do they just say "Barack Obama" because he's president?  Or Hillary because she's famous (infamous?).  Are these respondents political at all?  Informed on the issues?  Educated? Just breathing?

What is it that we admire about Barack Obama?

His efforts to get to the truth about the massacre in Benghazi?  Ooops, no.  Not so much.  His attempts to protect his Ambassador to Libya while stationed in Benghazi?  Nah.  Can't be that.

How about his program to sell weapons to drug cartels in Mexico?  Was that admirable?  I don't think the family of Brian Terry would think so.

Do we admire him for his absolutely relentless push to pass Obamacare, a law that is still being deciphered, its faults and foibles still revealing themselves, and the inoperable, poorly written website that accompanies it?  Do we admire him for the amateur roll out of this unworkable, giant new entitlement program?

His commitment to keep education at the state level and keep the federal government out of your child's classroom?  Not even close.

Maybe its his ability to relate to the common man, the little guy, the average Joe on the street.  Hmmm, no, it's probably not that either.

I guess it could be that people admire Obama for his commitment to the privacy of American citizens and his adherence to the Fourth Amendment.  Wait, no..., that can't be it.

His protection of the Second Amendment?  Nope, not that either.

Immigration.  That's it - protecting America's borders and saying no to amnesty.  The idea that immigrants need to follow the laws in place and follow the path to citizenship that millions have followed before.  The protection of American values and culture, the belief in American exceptionalism!  Dang it, no.  That's not it either.  Obama has just vowed to fight for amnesty (probably trying to protect the Democratic politicians on the chopping block this cycle.)

His refusal to bow to foreign leaders?  Nah.  He's done that at least eight times, not to mention chumming it up with dictators.

I don't get it.  Maybe we admire him for his golf game, his lavish vacations and White House parties, his general ineptitude and his arrogance.

As far as Hillary Clinton goes, I see nothing admirable there either.  It was on her watch as Secretary of State that four Americans were murdered in Benghazi, a situation that should never have happened given that the consulate there asked repeatedly for increased security and was denied.

I just don't get it.  At best it's a dismal sign of things to come.  If we are to assume that the poll respondents are informed, educated Americans (and there's certainly no evidence of that) then all hope for conservative values in this country is lost.

At best these are people that vote.

I wouldn't worry too much it Pat. 16% isn't actually all that much.

16% is still quite a bit lower than Obama's dropping approval rating.

And 16% is lower than the Democrats' rock bottom base. It's basically the people that would still vote Democrat should the Dems decide to announce to everyone to prepare for "A Great Leap Forward," or to start a "Reign of Terror" against the enemies of the State.

Hard core Leftists desperately look for a "Light-bringer" (heh, Lucifer I guess) messiah who can do no wrong and will lead them to a Marxist paradise-- and I'd say 9% of America sounds about right in this day and age.

Then just factor in another 7% of low info people who didn't say Tom Cruise, Brad Pitt or Justin Bieber and you get 16%.

16% is hardly a ringing endorsement and the Hildabeast gets no better.

Considering there are a lot of 1%s, i'd say the jury has yet to come in.