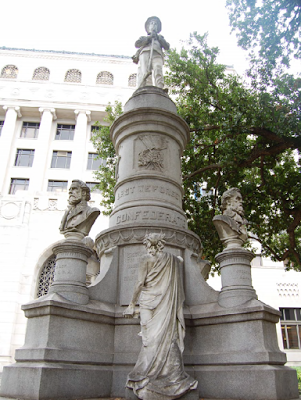 I am watching with unease all of the protests around Confederate monuments, most recently in Dallas and now in Richmond.  I am uneasy about the upcoming rally in Shreveport, not because our monument is in danger (it isn't), but because of outside agitators coming to our city.

Our monument situation is different than monuments in many of these other cities. Most of those are not on private land as ours is.  Shreveport's situation is unique.

That being said, there are still groups planning to agitate and protest in our city comprised primarily of people who don't live here:

A group invoking what it describes as southern cultural heritage and Christian values plans to stage rallies to protest the possible removal of the Confederate monument at the Caddo Parish Courthouse.

The organizer, who says he represents the Gulf Coast Patriot Network, has used Facebook to get word out about the events planned for Sept. 30 and Oct. 1 in language that accuses groups such as Black Lives Matter of engaging in terrorism. The announcement has been widely discussed in social media.

The rallies were announced a few days before the Caddo Parish Commission’s Long Range Planning and Special Projects committee voted in favor of removing the Caddo monument. But the committee's vote Tuesday did prompt Rex Dukes to expand his outreach nationally, he said in an interview. Dukes said he founded the Gulf Coast Patriot Network.


While I commend and share their loyalty to heritage and history, I don't condone the outside agitation that comes with these protests.

This is the description of the event from the organizers:

This is a call out to all southern States to all citizen's of the Confederate States of America to come to Shreveport La to stand United as one and to all U.S. citizens that love history and wants it to be preserved and cherished to stand with us to protect our monuments and our southern heritage. This event is to bring about and unite all southern states to protect our history our monuments and our Battle flag and our way of life.we can no longer stand idly by as we are attacked buy the radical groups of ANTIFA, BLM, Cair, MBH, B100 groups that have merged together as one large terrorist group. It is time we show just how United we our as southerners and to show that we will no longer allow the destruction of are country. And to show that the SOUTH HAS RISEN once again to show that we will fight to keep our history and heritage in place.to preserve it for are kids and grand kids and for all the world to see. This event must go down in the history as the largest gathering of southerners to ever happen. GOD Bless Dixie and GOD Bless CSA.


I watched the violence in New Orleans and other cities through many live news feeds.  We don't want that here.

Both the Sons of Confederate Veterans and the United Daughters of the Confederacy have declined to attend these protests as organizations.  It's possible that some members will attend as interested citizens, however.

I now understand better why people in New Orleans didn't want outsiders protesting at their monuments.  In reality, what happens is that this increases the likelihood that the monuments will be removed or vandalized because of the negative attention.

And then there's the Antifa crowd that shows up once these protests are announced. They come with hate and they come with violence.  We do not need that in Shreveport.

I am all for peaceable protest and for the right to protest.  It's the outsiders and the ANTIFA crowd I am against.

Our monument has stood with dignity and peace since 1906.  It has been well preserved and maintained and stands on private ground, enclosed by a fence.  Clio, the muse of history, is pointing to the word Love in her book.  Let's let that continue to be the case.
Posted by Pat Austin Becker at 10:13 AM