If you're looking for a great legal thriller please be advised that Michael Henry's latest book in the Willie Mitchell Banks series, The Election,  is now available in both paperback and a Kindle version.

In this sixth installment of the series, D.A. Willie Mitchell banks is running, rather reluctantly, for re-election.  During a political event, a young boy goes missing which draws Willie Mitchell into one of his more challenging cases yet.  He must now prosecute a capital murder case with no body, unless the child is found.

I love this novel because it focuses on Willie Mitchell and less on the secret-squirrel activities of his son Jake.  That's not to say I don't like the story lines with Jake, I do; but I have a secret crush on Willie Mitchell.  He's quirky, he's funny, he's purely southern, and he's an honorable man.  He's flawed, but he's human.

Author Michael Henry is gifted at writing dialogue.  I think dialogue is sometimes difficult to write without sounding stilted or forced.  With Henry's novels, you feel like you're sitting in the same room with his characters eavesdropping on a conversation.  While the plot of the missing child is 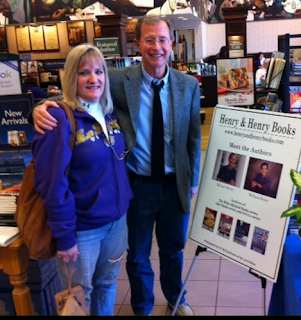 serious, there are still plenty of jokes and light moments that kept me laughing.

We meet a couple of new characters in this book and while I'm usually averse to change, I liked Cheryl Diamond very much; she comes to Sunshine for the trial after having a psychic vision about the missing boy.  Only Michael Henry can make a beautiful blond psychic in a Lincoln Town Car a sympathetic character!

The town of Sunshine, Mississippi is as southern as they come and Henry seems to have no limit to his ability to pull quirky characters out of the tiny Mississippi Delta town.

Summer reading season is coming up; order all of the Willie Mitchell Banks series to keep you entertained!  You'll fall in love with them.  If you like John Grisham novels, or Michael Connelly, you'll love Michael Henry.