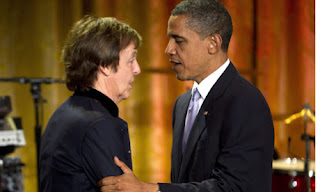 Any esteem or regard I might have had for Paul McCartney has pretty much evaporated now.

What a cheap shot he took at Bush at a nonpartisan event meant to honor him.  What a jerk:

It's a fantastic honor for the Gershwin family to give me this incredible award and for me to be awarded it by the Library of Congres,s and in fact, after the last eight years its nice to have a president who knows what a library is."

Apparently Paul McCartney has no idea how much George W. Bush reads.

Why oh why do these celebrities insist on forcing their political opinions on fans? The suggestion Bush didn't read is asinine but the idea that Obama is a deep intellect is even more asinine. How is that intellect helping him plug the damn hole? Oh it's not.

I agree. What a tool!

The country is turning into crap while Obama is having a date night at the White House, and Sir Paul is complicit by playing the fiddle for America's version of Nero while Rome is burning.

This is infuriating. And of course President Bush not only read widely but actually understood the implications of what he read, something that BO cannot manage. He just likes the pretty pretty words and has no clue as to their meaning.

And I am SO over celebrities bashing President Bush and by extension America. I'm adding Paul to my "no buy" list which also includes Tom we went to war because we're racists and hate yellow people Hanks and Sean I hope you get rectal cancer Penn.

Paul McCartney is a clueless old hippie who seems to forget that our country made him a very wealthy man. Excuse my french but F#CK. HIM.

My two cents plus a link back.