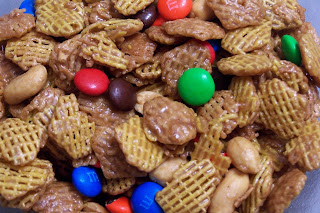 I've begun my Christmas baking binge. Over the Thanksgiving holidays I made the fruitcake. I know, nobody likes fruitcake, but I do. And I like all the "doctoring" you get to do to it, like how it changes the taste if you doctor it with apple juice or bourbon, or even brandy. I've made a "light" fruitcake - that's not to say light in calories, but light in color & texture. As we speak, it's in the fridge "aging!"

oaked cheesecloth in an airtight box.

And the Chex mix - good lord, what would Christmas be without Chex mix? I usually make multiple batches of Chex mix. For example, I made my first batch Saturday and well, between Steve, me, and my mom, we're making a pretty good dent in it so far. Not much left to give away. So, I'll make more! I always experiment with stuff to put in, like sometimes I throw pretzels in there, and sometimes I put pretzel goldfish instead. I've seen some recipes call for Funyuns or Cheetoes but I think not.

The best twist on Chex mix is this super-secret recipe I got from Lauren Harrison in Iowa. Lauren is married to Steve's nephew Kenny. We went to visit them in Villisca, IA a couple of years ago and Lauren brought out this Chex mix that was sweet and had M&Ms in it. We couldn't keep our hands out of it. At that time, Lauren wouldn't come off the recipe but she did donate the rest of the bag to us. She finally told me I could have it since I lived south of the Mason-Dixon line and she was pretty confident that I wouldn't give it out to any of her friends. I don't think she'd let me post it here either, so you'll just have to wonder how good it is. I finally got the recipe from Steve's sister Sheryl and then I lost it and nearly panicked. I had to beg for it again.

Next up on the baking list is my mother's Never Fail Fudge recipe (I've never actually tried it, but she's unable to do it this year so I'm giving it a shot.) And this weekend - Martha Washington Candy! Good stuff! I'll post that recipe after I make them, if you're interested.

Eating is one of my favorite parts of Christmas!
Posted by Pat Austin Becker at 5:55 PM

To steal a phrase, and for all of you who play the Rachel Ray drinking game, get your drinks ready. "Yummo!"

ever do the reindeer chex mix - white chocolate drizzled over chex mix? it rocks!

so, when is the care package heading my way? :)