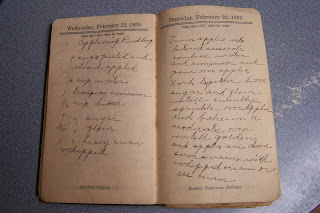 This is one of my mother's great spinster aunt's cookbooks, or rather, collection of recipes. There are pages and pages of hand-written recipes and recipes cut out of old magazines and newspapers which are pasted down. My mom and I have three or four of these books; they are blank paged "year books" given out by insurance companies; this one is the 1939 volume given out by United States Fidelity and Guaranty Company.

In one of the books my mom has is the treasured Aunt Kate's 24-Hour Fudge recipe. The problem with these recipes in these books is that often only the ingredients were listed. I guess the great-aunts knew enough about being in a kitchen to figure out the rest. I'm not so sure I could pull that off on some of them. The fudge recipe was tricky enough but now that I've made it, it seems simple enough.

If you are brave, you can try it, courtesy of my mom's great-aunt Kate Ernest. It's fabulous.

THEN, In a double boiler melt 10 large marshmallows with 1 Tbsp. water. (This doesn't take very long.) Add this to the sugar & milk; stir, then pour into mixing bowl with the butter & chocolate chips. The heat from this will melt the chocolate chips & butter. [It helps if the butter is room temperature when you do this.]

Stir until mixed well then pour into a buttered 8 x 8 pan; let stand for 24 hours in the refrigerator before cutting [I let mine sit outside of the refrigerator for about 30 minutes before I cut it, just to soften it up a little.]

It's not as complicated as it might sound and it's wonderful. Creamy and rich! Mom says the secret is not to cook it longer than eight minutes once the boiling starts. I lowered the heat a tiny bit to low/medium once it started boiling.
Posted by Pat Austin Becker at 6:59 PM

see the southern living where they framed old family written recipes like this? would be a cute idea to do!