Is Axelrod Planning an Exit? 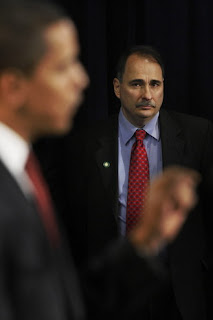 The New York Times profile of David Axelrod is that of an angry, frustrated, and, cranky man. He's frustrated by criticism from "the peanut gallery" that Obama just isn't getting the message out correctly:

In an interview in his office, Mr. Axelrod was often defiant, saying he did not give a “flying” expletive “about what the peanut gallery thinks” and did not live for the approval “of the political community.” He denounced the “rampant lack of responsibility” of people in Washington who refuse to solve problems, and cited the difficulty of trying to communicate through what he calls “the dirty filter” of a city suffused with the “every day is Election Day sort of mentality.”

The "peanut gallery," which one would assume is kin to the "chattering class" is just too stupid for this smart-power administration. They just can't figure out how to get down to the level of the common man and get their message out properly. Talk. Slower.

Could it be that it's the message and not the messenger?

The team with the best and brightest mix of "star power, brain power, and political muscle" just can't get the American people to swallow the expansion of government and intrusion into private lives that is topmost on their agenda.

As Axelrod puts it:

Probably because the American people don't want what you're selling, sir.

It's all so much harder than Obama thought it would be. It's all Bush's fault - if Obama could have just done it all his way and not had to clean up after Bush, it would be so easy:

“Believe me, if we were charting this administration as a political exercise, the first thing we would have done would not have been a massive recovery act, stabilizing the banks and helping to keep the auto companies from collapsing,” he said. “Those would not even be the first hundred things he would want to do.” But Mr. Axelrod argued that the president, confronted with “breathtaking challenges,” did not have the luxury of moving more slowly or methodically.

Here’s the thing: leave if you don’t like it or can’t convince people of what a swell job you’re doing. There is no mandatory draft for the White House. In fact, some people consider it an honor and privilege to serve there.

Indeed. She goes further to suggest that the groundwork may be in place for an Axelrod exit, and she may be on to something. The New York Times profile reports:

As Mr. Obama began his term, Mr. Axelrod told him he would stay at the White House for a finite period — believed to be about two years — and that time frame remains unchanged.

So is Axe planning his exit? He says, “I know I’m not cut out for this town,” so maybe he's ready to hit the road. Again, it's not the messenger, Mr. Axelrod, but the message. I don't think anybody who comes in to fill Axelrod's shoes will be able to change the fact that people don't want a national takeover of the health insurance industry or massive expansion of government programs and entitlements, or an exploding deficit.

No wunderkid on earth will be able to sell that message.

(More at Memeorandum)
Posted by Pat Austin Becker at 10:45 AM

If President Axelrod goes, who will we be left with?

"If President Axelrod goes, who will we be left with?"

Arte, I don't think you have anything to worry about, whenever a General Secretary of the old Soviet Union passed away there was always someone in the shadows of the politburo