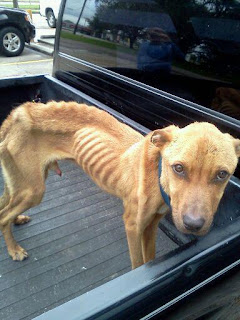 Via The Dead Pelican, this one touched my heart:

A dog's journey to recover from a terrible case of neglect has captured the hearts of people across Baton Rouge.

Joseph, a mixed-breed dog, was found roaming the streets on Plank Road back at the beginning of MarchApril. His condition was beyond emaciated. To many, it was a wonder that he even survived.

“We were shocked that he could even stand,” Jessica Card, Director for YELP, recalled. “He weighed in at 22 pounds when he was found. He should have weighed probably between 45-55 pounds.”

Read the whole thing.  There's video at the link, too.

When I got through crying, I went to the YELP site and made a donation for Joseph.  Then I signed up for a small monthly donation for YELP's other animal rescue efforts.

There's a Facebook page for Joseph here where you can follow his progress.  He already looks better than he did in this picture.

It completely btoke my heart that any human being could be so utterly cruel to any animal. People saw a 62 year old man cry.