Another American Manufacturing Plant Shuts Down 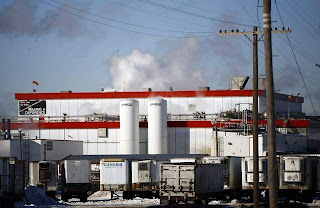 In an article published yesterday in the New York Times, it seems that concern is suddenly growing that Amercian made goods is in decline:

Concern is increasing that this decline has gone too far. “I think there is a growing recognition that a diminished manufacturing sector will undermine our economy,” says Mark Zandi, chief economist for Moody's Analytics.

I find this statement to be incredible.  A "chief economist" is just now recognizing this?

I posted back in September about the closing of the last American GE plant to make incandescent light bulbs.  Those jobs went overseas as we transfer over by 2014 to mercury filled "energy efficient" light bulbs which are supposedly "better for the planet."

An accurate count would reduce manufacturing’s share of the gross domestic product, or total national output, to less than the 11.2 percent that the Bureau of Economic Analysis has reported through 2009, the latest figure available.

That 11.2 percent would be closer to 10.5 percent, if all of the imported components were counted as imported instead of domestically made. Even the 11.2 percent figure is down sharply from the 14.2 percent share of just a decade earlier, and the nearly 30 percent of the heyday 1950s, when almost every product bought by Americans was also made here.

As much as the Obama administration touts their success in "jobs created" by their stimulus plan, most of those "green dollars" went overseas:

The report estimates stimulus funding for wind projects have created roughly 6,000 manufacturing jobs overseas and just hundreds in America. Thus far, the Recovery Act has paid to create 1,807 wind turbines to fuel American homes, businesses, schools and other buildings. Just 588 of those were manufactured domestically, according to the report.

It's not just energy dollars or light bulbs going overseas.  Auto manufacturing has moved that way for years, partly to avoid the high union costs here in America.

The Times article highlights the last metal flatware manufacturing company closing down because it's cheaper to manufacture overseas.   In 2006, Whirlpool bought out Maytag and practically shut down Newton, Iowa as it moved most of those manufacturing jobs to Mexico.  Rockwell Collins is shutting down operations in Irvine, CA and moving part of its manufacturing to Mexico.

There are still plenty of things manufactured in the US, but many of those plants close down in one state to consolidate operations in another, such as the closing of the Avondale shipyard in south Louisiana, or the Morrell plant in Sioux City.

The bottom line seems to be, to me, if economic recovery stands any kind of chance at all we must find a way to support manufacturing and innovation in America once again.  As the NYT article noted, innovation is also in decline: even though the Apple iPhone and iPad were conceived here, their manufacture is in Japan and that's likely where the next innovation will originate.   Not here.

We can't survive as simply a service economy.  We're awash in restaurants, hotels, casinos, nail salons, hair salons, bars, and other service related industries.  We must re-energize manufacturing in this country to survive.
Posted by Pat Austin Becker at 10:36 AM

Email ThisBlogThis!Share to TwitterShare to FacebookShare to Pinterest
Labels: economy

It took an expert to figure this out? I learned that a strong economy is dependent on a manufacturing base in my first year college business course, page one in the book.

Mr friend Darren at
http://rightontheleftcoast.blogspot.com/ had a great article on green jobs today....Green Smoke Screen ...the big point made:

On the face of it, green-job creation seems straightforward. Deploying more wind turbines and solar panels creates a need for more builders, technicians, tradesmen, and specialist employees. Voilà: Simply by investing in green policies, we have not only helped the climate but also lowered unemployment. Indeed, this is the essence of many studies that politicians are eagerly citing. So what did those analyses get wrong?

The fundamental problem is that green-energy technologies are still very inefficient and expensive compared to fossil fuels. Deploying less efficient, more expensive alternative-energy sources will hurt businesses and consumers, not help them.

A freaking disaster. Like this high speed rail plan being pushed...did anyone ask "Is there a market for this?" But don't confuse Fredo Obama with the facts when his mind is made up....

Did you see the guy in Germany selling banned lightbulbs as "heat balls" to get around the law?

LOL- one thing about draconian government regulation... there's always a loophole for the resourceful