Take a Trip to Minden's Fasching Celebration and Karneval! 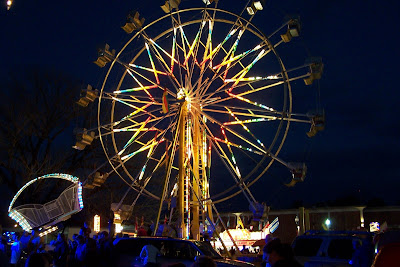 This past Saturday Steve and I went to Minden for their Fasching Karneval celebration, which is the German version of Mardi Gras.  I was coming down with my semi-annual crud when we set out but I was determined to persevere, crud or no crud.  And to pay THAT piper, I've been sicker than a dog the past two days and made my semi-annual trip to the doctor for my crud meds yesterday.

Anyway, health nonsense aside, the Fasching was wonderful!  We had a great day!  I didn't take many pictures inside Milly's shop this time because she was sooooo busy and there were so many people in and out that it was difficult to lurk around taking pictures.  My objective for the day was to video the first floor for you and I only half accomplished that.  I got the front half of the first floor (and you get a little Milly song about halfway through that).  The parade was coming right about that time and we had to lock up and go watch.  When you watch it you'll get an idea just HOW MUCH stuff she has in there!

Earlier in the day we watched a couple of the bands at the bandstand:  the Matthew Davidson Band was performing when we walked up.  I'd never heard this kid before but good golly, he's only 13!  Phenom!  You'll definitely be hearing more about this kid.

Buddy Flett came up next, and that's who I really wanted to see.  I've followed Buddy's music for years and as most good Shreveport groupies know, Buddy has recovered from a serious bout of encephalitis which he contracted in 2008.  He awoke from a medically induced coma and was unable to walk or talk, and that included playing the guitar.  He had to relearn all those skills.  There's no doubt that he's back and indeed, he's just returned from LA where he attended the Grammys as a nominee.  You won't meet a nicer guy than Buddy.

Here is his performance of Grammy nominated Dance For Me Girl which he wrote:

After that we went back to the shop and while there I met a couple of folks who read my blog and introduced themselves - very nice people and I was thrilled to meet them!  It's always fun to meet your internet buddies!

Later in the afternoon we went next door to the 507 Grill where a friend of Milly's was playing guitar and singing; plus they had free beer and that's all I needed!  We had lunch there earlier in the day and again with that praline cheesecake - OMG.  Wonderful!  This time I had the broccoli/cheese soup in a bread bowl for lunch and it was good.  Steve had a hamburger. 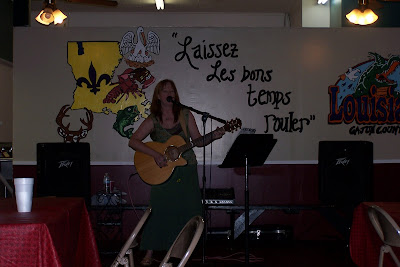 The parade was really nice - just the right length, nobody was crazy, everyone had fun.  Milly danced in the streets with the music from the floats and it was all very festive.

But by the time we headed home, I was exhausted!  The crud got me.

I'm glad I went, though and we'll be sure to go back next year.
Posted by Pat Austin Becker at 4:57 PM