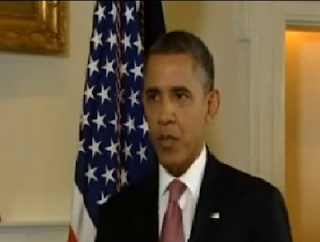 In yet another example of Obama's total lack of business acumen or experience, in an interview with KTIV (Sioux City) Obama denies the possibility that Obamacare is pushing serious burdens on small business owners.

Via The Washington Examiner:

"That'd be kind of hard to explain," an incredulous Obama told KTIV of Sioux City, Iowa. "The only folks that have been impacted in terms of the health care bill are insurance companies who are required to make sure that they're providing preventive care or they're not dropping your insurance coverage when you get sick," he said. "And so, this particular company probably wouldn't have been impacted by that."


It would be difficult to be more out of touch or insulated from the complexities of small business ownership than that.  "The only folks...impacted...are insurance companies"?

He currently provides insurance to only his management staff yet ObamaCare would require him to provide insurance to every full time employee.  Mr. Womack explains that his current profit per employee is $3,000  yet the Obamacare mandate would cost $7,000 per employee.  He's looking at major cuts including cutting employee hours and services.

Mr. Womack was planning on building more restaurants throughout Ohio yet the Obamacare mandate will preclude that.  It doesn't take a rocket scientist to see how that cuts into economic growth.

The regulations of the Obama administration, and Obamacare in particular, are certainly stifling economic recovery.

It's not necessarily the number of regulations coming out of his administration so much as it is the cost of the regulations and their effect on growth that is at issue here.

Last November Bloomberg reported that while Obama had (at that point) instituted fewer regulations, they have cost more.

The number of significant federal rules, defined as those costing more than $100 million, has gone up under Obama, with 129 approved so far, compared with 90 for Bush, 115 for President Bill Clinton and 127 for the first President Bush over the same period in their first terms.


And of course, the kicker here is that these numbers do not include independent agencies such as the SEC and the EPA. 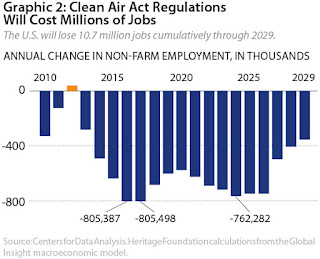 In 2009, Michigan Science did an extensive study on the effect of the EPA's Advance Notice of Proposed Rulemaking.  It's not pretty.

His his book, The Great Destroyer, David Limbaugh recounts the story of Peter Schiff who explained the impact of government regulations on his investment company.  Mr. Schiff testified before the House Oversight and Government Reform Subcommittee on Regulator Affairs in September 2011:

Regulations have substantially increased the costs and risks associated with job creation.  Employers are subjected to all sorts of onerous regulations, taxes, and legal liability. The act of becoming an employer should be made as easy as possible. Instead we have made it more difficult. In fact, among small business owners, limiting the number of employees is generally a goal. This is not a consequence of the market, but of a rational desire on the part of business owners to limit their cost and legal liabilities. They would prefer to hire workers, but these added burdens make it preferable to seek out alternatives.

In my own business, securities regulations have prohibited me from hiring brokers for more than three years. I was even fined fifteen thousand dollar expressly for hiring too many brokers in 2008. In the process I incurred more than $500,000 in legal bills to mitigate a more severe regulatory outcome as a result of hiring too many workers. I have also been prohibited from opening up additional offices. I had a major expansion plan that would have resulted in my creating hundreds of additional jobs. Regulations have forced me to put those jobs on hold.


The evidence that this administration is stifling job growth is insurmountable.

For anyone to believe Obama's misleading gibberish is inconceivable.

Obama has often been touted as a great orator and while I fail to see that or to agree with it, it is safe to say that he is a master at just saying whatever he wants to say and expecting you to believe it for no other reason than that he said it.

Shame on you if you do.

Obama says that only insurance companies have been hurt by Obamacare?

Shame on him.
Posted by Pat Austin Becker at 2:16 PM