Take a Trip Along East Texas Back Roads 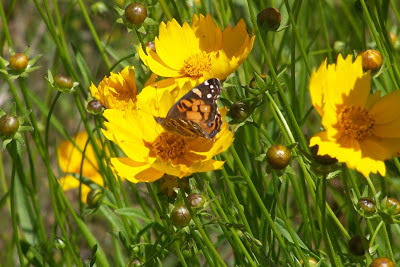 East Texas has the most spectacular wildflowers this time of year!

Steve and I headed over to Frisco, Texas this weekend where my daughter and her husband have just moved into their new house.

Confession time:  If there is really a phobia about being in heavy traffic then I've got it.  I was in a car accident years ago (probably 15 years ago!) where a lady ran a stop sign onto a busy highway and I just T-boned her.  It was totally unavoidable on my part, and ever since then I've been totally phobic about riding as a passenger in heavy traffic.  It doesn't seem as bad if I'm doing the driving but I still avoid heavy traffic.

But lo and behold, we figured out a back-roads way to get there and I was happy as a clam.  (Are clams really happy?  Where did that expression come from?)

We love the back roads anyway and seldom take major highways when we go on all these little day trips.  We prefer the scenery on the back roads. 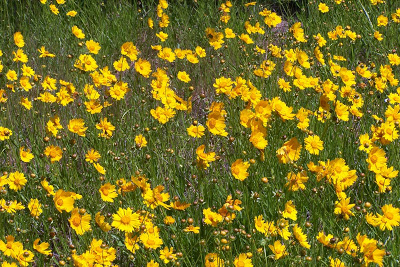 At any rate, we took I-20 to Tyler (which isn't bad and doesn't scare me once we get out of town) and then turned off on Highway 69 through Lindale, Mineola and a host of other tiny towns.  Then we took 380 west to Frisco - easy as could be!

Back to the wildflowers.  Texas is known for the bluebonnets and they are already blooming along the roadsides but I fell in love with the Huisache daisy!  They were stunning! 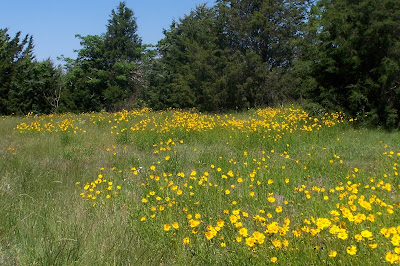 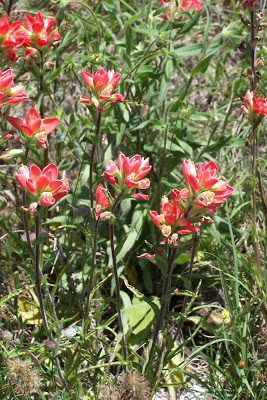 Now contrary to public opinion, it is not illegal to pick the wildflowers, but most people, out of consideration and common sense, do not.  There is a law against trespassing, of course, and against digging up clumps of flowers.

After stopping to admire the flowers alongside I-20 we made our way to Lindale.  The town's current claim to fame seems to be that it's the hometown of country star Miranda Lambert.    Miss Lambert has a store there and her wine label, Red 55, is sold in a store on the main drag through town.  We stopped in and looked around, but not being Miranda fans per se, or wine fans exactly, we were out of our element.  It is, apparently, a very popular stop though.

We were hungry so we looked for a local place with lots of cars.  We stopped at Petty's Steak and Catfish on Main Street. 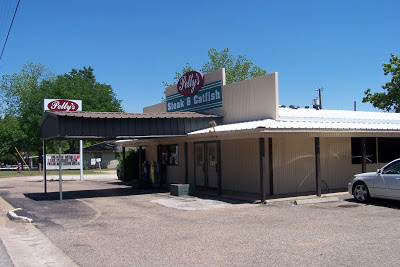 I like the kind of place that when you walk in people stop and look up from their plates to see who is coming in.  That means they're regulars, they eat there often, and they all know each other.  Locals.  That's a good sign.

I ordered the chicken fried steak (what in the world else would you order in Texas for crying out loud!?) and it was wonderful. 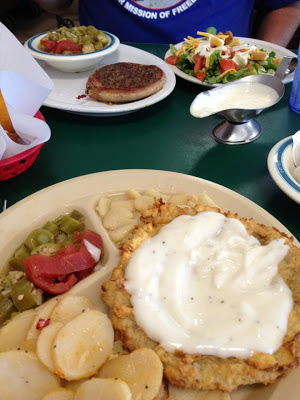 Steve went for the chopped sirloin.  We both had okra and tomatoes.  Without sounding too much like Robert Irvine, let me just say that everything on the plate was fresh, not canned, and perfectly seasoned.  We met the owner's mom in the parking lot outside as she was coming in.  We visited for a few minutes and she shared some of her recipe secrets with us, especially dessert recipes!

Petty's is a great place to eat and even if you don't go the back roads like we do, it's not far off the interstate and well worth the detour.  It's much better than the greasy hamburger chains along the way.

Not far at all from Lindale was Mineola.  Call me sheltered, but I never knew about this little east Texas treasure.  I'll definitely be back in Mineola! (Click on the photo to enlarge). 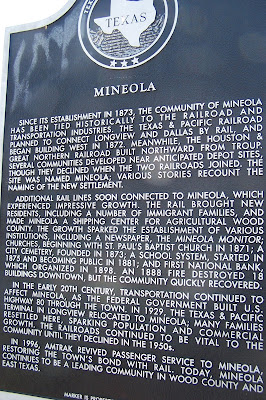 On this particular stop they were having their May Days carnival in the historic downtown area. 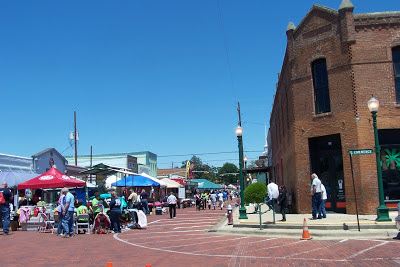 There was a fun house for the kids: 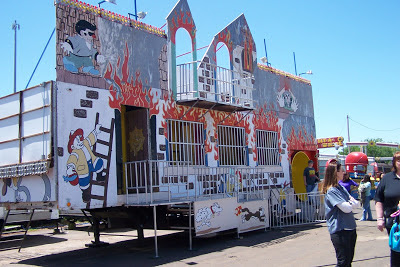 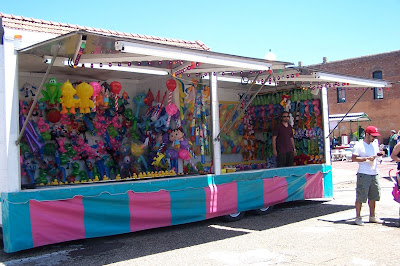 And I almost came home with Daisy: 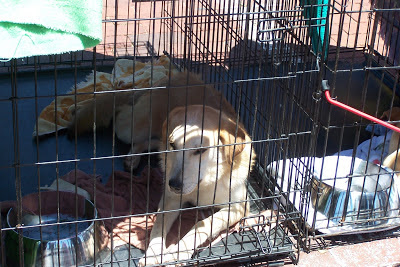 What a sweet, precious puppy she is!  I hope she found a good, forever home Saturday.  It broke my heart to have to leave her behind.

But the main reason I'll head back to Mineola is that there is an antique shop everywhere you turn. 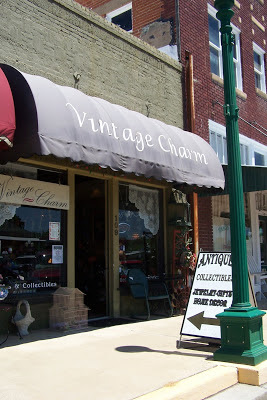 We had to move quickly because we really needed to get on to Frisco, but we did run into this huge antique barn: 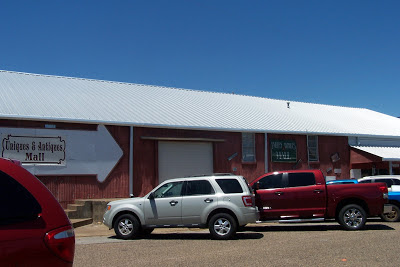 Inside, you could buy a nifty camera: 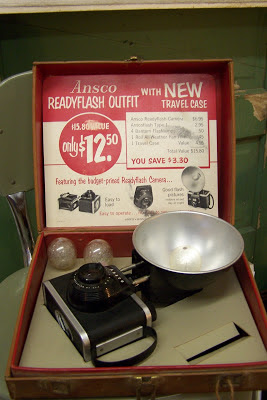 Or stock your vintage kitchen: 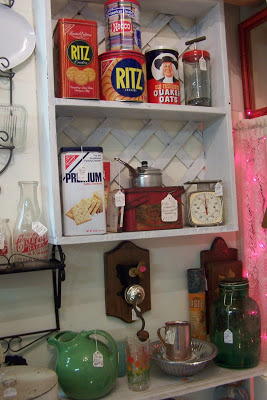 There's a little railroad museum there that I'd like to visit.  Steve had his picture made as Mr. Conductor: 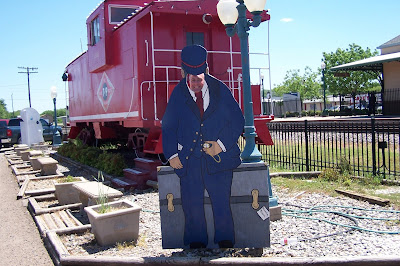 But here is the museum (or part of it): 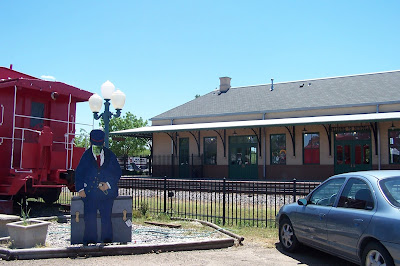 Mineola has plenty of quaint, historic buildings in the downtown area: 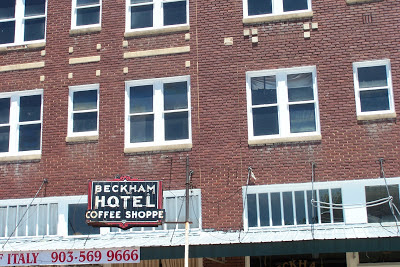 The Beckham Hotel is now a private residence and I'm fascinated with it.  Apparently this fellow bought it, tried to restore it and put it back into service, then abandoned the idea when he realized he was "a poor host" and that nobody wanted to stay in "an old antique hotel."  (I do!).  Read the story here.

I'd love to see the inside.

Another great building is the old Henry Hotel: 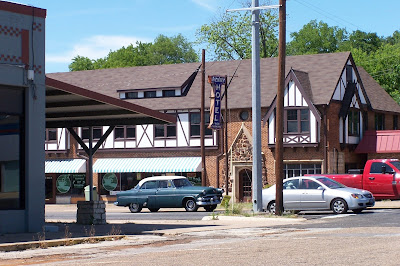 It houses a coffee house now but you can still see the advertising on the side of the building: 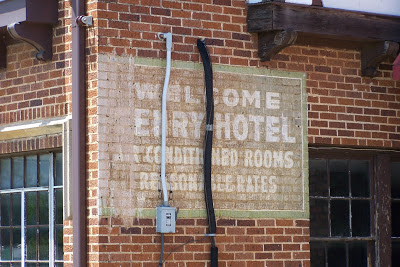 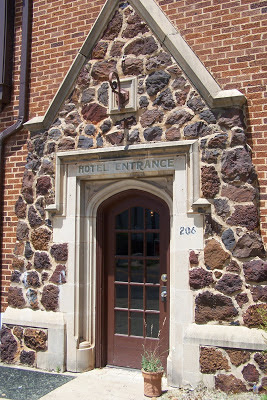 We finally got to Frisco, found the new house, and spent the rest of the afternoon with my daughter, her husband, and our grandson who turns one year old on July 4.  I'd show you his picture but his parents are very private and would prefer he not be plastered all over the internet; I totally respect that.  Suffice to say that he's the cutest, most adorable little fella in Texas!

My daughter and I headed into Dallas to see Wicked, which I'd never seen.  I was blown away; I totally loved it!  One of my favorite songs from the production is here (no embed!).  I bought a Wicked t-shirt!  Love it!  We had wicked good seats, too! 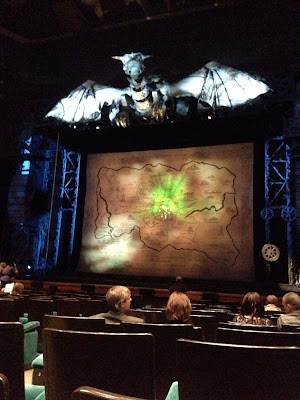 It was a grand affair, to be sure!  After breakfast and more visiting Sunday morning, we left a little early because the happy homeowners still had plenty of unpacking and settling in to do.  They'll be working at that for a while!

On our way home on Sunday Steve and I stopped in Mineola and ate at the East Texas Burger Company downtown. 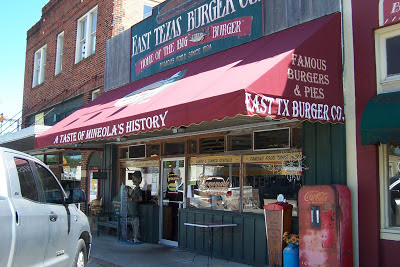 It was very good.  Next time I'm going to try one of the fried pies!

We also stopped at a roadside plant and vegetable stand right outside of Alba, Texas:  Pickett's Plants and Produce. 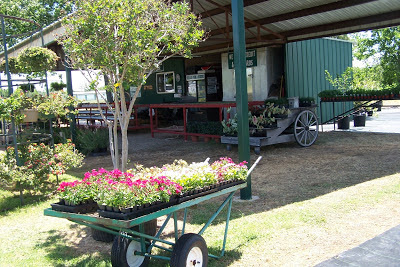 We met a real friendly proprietor and his grandson and bought some flowers and veggies. 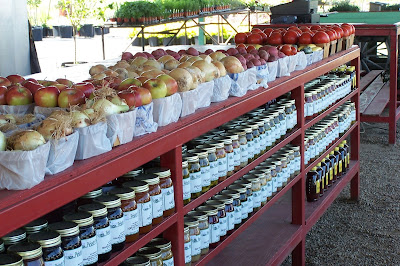 The flowers were gorgeous and I bought some pretty yellow perennials: 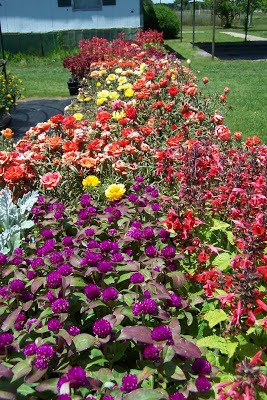 We finally made our way back to Shreveport, unloaded the car, and put one more road trip in the books.

I'm thrilled with my back roads route to Frisco, and look forward to doing it again soon.  We have yet another route we've yet to try as well, so who knows, maybe next time we will try that one!

East Texas is just lovely and I'm a pure sucker for quaint little towns.  We did not meet one, single unfriendly soul all along the way.  People stopped to talk to you, to visit like you were an old, long lost friend.

And you know what everyone is talking about?

I'm not kidding.  When they find out you're from Louisiana, they want to know if you know "the Duck Dynasty people."

Maybe we need to take a road trip to West Monroe next time!

My brother-in-law and sister-in-law live in Frisco. They really like it, and I hope your daughter & her husband will too. :-) We are in a little town outside of Brownwood, which is south of the metroplex, but when we go up there, we swing around above DFW to come in from the north west on the little surface roads - I am with you, city traffic is not our thing.

The wildflowers this year are so wonderful. Glad you enjoyed them! We will have to check out Mineola the next time we are up that way!

"I'm not kidding. When they find out you're from Louisiana, they want to know if you know 'the Duck Dynasty people.'"

You mean you don't?

My In-Laws live in East Texas and I end up going there at least once a year. I have never found friendlier people anywhere else in the US.