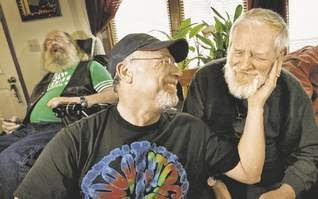 Via the Des Moines Register comes this heartwarming story - a program by the U.S. Department of Veteran's Affairs where veterans can choose to live with "foster families" instead of in an institution. The program is new to Iowa and the Register highlights a family in Winterset for their story:

If they weren't living in Joe Wymer's house, Vietnam War veterans Ron Marusek and Bob Fenoglio would be in a nursing home by now. Marusek, 65, has terminal cancer. Fenoglio, 67, has a severe case of multiple sclerosis. Both decided to enroll in a new federal program in which veterans can choose to live with paid "foster families" instead of in an institution. "They're awfully nice to me," Marusek said of his foster family, which includes local residents whom Wymer hires to come over and help. "They take care of you like you're gold. They treat you with respect and compassion."

The veterans pay the homeowner for services such as bathing, meals, laundry, and transportation to doctors appointments. Nurses from the VA make regular visits to the home to check on the veterans. Sometimes the visits are unannounced. For the veterans, they say it gives them a chance to be free and to live in comfortable housing. Both of Wymer's veterans were in Vietnam:

Fenoglio said he lived for a while in a VA long-term care facility, where he felt "enslaved" by rules. When asked how his life has changed in the foster arrangement, he typed, "I am free."

He controls his own money now, and he has his own bedroom, where he keeps a prized collection of black leather motorcycle jackets. He can sit in Wymer's comfortable living room, smoking cigarettes and watching whatever TV programs he chooses. On this day, he was keeping an eye on "The Rachael Ray Show."

Marusek, an Army veteran who served in Vietnam from 1965 to 1967, moved in with Wymer in August. Chemotherapy had left him bald and weak, and he carried just 133 pounds on his 5-foot-7-inch frame. He credits his host's cooking for bringing his weight up to 164 pounds. He loves Wymer's chili, spaghetti and homemade pizza. "And ice cream," he said. "I have it every day."

Wymer had already been caring for his aging father at home when he decided to participate in this program. He felt it was a way to give something back to veterans and he had the time and opportunity to give.

Some have concerns about the program, however, in that there may not be enough safeguards against abuse and exploitation of veterans. Read about that here.

The program isn't in every state yet, that I can find, but you can contact the VA here. The Des Moines Register article also lists contact information for the Iowa program.

For Wymer and his two veterans, the program is working like a charm!

(Photo credit: The Des Moines Register)
Posted by Pat Austin Becker at 8:39 AM

That is so nice to read. What a golden-hearted guy.