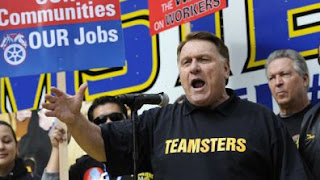 Teamsters President Jimmy Hoffa had some rough rhetoric for the union faithful today while firing them up for Obama's speech.  Via RCP:

"We got to keep an eye on the battle that we face: The war on workers. And you see it everywhere, it is the Tea Party. And you know, there is only one way to beat and win that war. The one thing about working people is we like a good fight. And you know what? They've got a war, they got a war with us and there's only going to be one winner. It's going to be the workers of Michigan, and America. We're going to win that war," Jimmy Hoffa Jr. said to a heavily union crowd.

"President Obama, this is your army. We are ready to march. Let's take these son of bitches out and give America back to an America where we belong," Hoffa added.

What happened to the new civility?

Flashback to January when Martin Kaplan wrote on HuffPo:

If you're worried that violent video games may make kids prone to bad behavior; if you think that misogynic and homophobic rap lyrics are dangerous to society; if you believe that a nipple in a Superbowl halftime show is a threat to our moral fabric - then surely you should also fear that the way public and media figures have framed political participation with shooting gallery imagery is just as potentially lethal.

Even Obama spoke of a "new civility in discourse" in January.  Did I miss the part in his speech today when he censured Hoffa for his lack of civility?

Nope, I don't think he addressed that.  In fact, he said

"Straight shooters"?  Can we still say "shoot" in the new discourse?

Linked to at:
Linky Lovin' The Ladies

It's ever so fun to find out that Tea Party members aren't American "workers."

Pass me that box of bon-bons and let's order another round of pink champagne cocktails.