71% of Voters Nationwide Are TICKED OFF 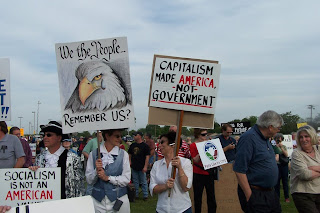 My goodness! This is interesting!

Seventy-one percent (71%) of voters nationwide say they’re at least somewhat angry about the current policies of the federal government. That figure includes 46% who are Very Angry.
But what does it mean?

Ed Morrissey puts it in perspective:

The middle class, which Barack Obama successfully wooed in 2008, have become very disenchanted with the current leadership. Middle-aged people have also gotten angry. The big problem for Democrats beyond the anti-incumbent tilt going into 2010 is the massive anger among independents, which we have tracked for several months. Democrats appear to have completely alienated a key voting bloc, and furthermore, motivated them into action. At the same time, they’re demotivating their own base.

You remember the Tea Parties that exploded this summer? That's them. Those middle class, average folks. Sick and tired of massive government explosion and spending. That's them.
Posted by Pat Austin Becker at 9:24 PM

What's interesting as well is that the Left have modeled their whole political stances and strategy at being "ticked off" at fadish targets-- tobacco industry, nuclear power, etc.

Now they are having to deal with protests that have their roots in genuine outrage-- much like the Civil Rights movement of the 50s and early-to-mid 60s-- rather than self-manufactured, feigned or fashionable discontent.

I think Obama and Congress are ill-prepared to deal with any of it except with slander and denial.