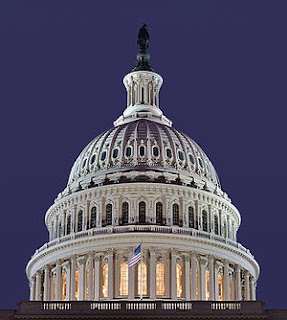 Last night, while you were sleeping, the Senate voted for cloture on Obamacare. The vote was 60-40. No Republicans voted "Aye".

The back room deals on this thing have been deplorable. The rhetoric has been worse. Now the bill goes to conference between the Senate and the House, but expectations are that the final bill will be very much like the one the Senate just passed, which, as I see it, is the worst of all of them. This should take place early next year.

There are some serious differences between the House bill and the Senate bill, primarily over the abortion language, so this isn't a done deal just yet. But, Politico reports Sen. Tom Coburn as saying, “This process is not legislation. This process is corruption, and it’s a shame that that’s the only way we can come to consensus in this country is to buy votes.”

Continue to fight until the last breath, and remember this in 2010 when you go to vote in your mid-term elections; now more than ever, elections have consequences.

(More at Memeorandum)
Posted by Pat Austin Becker at 5:04 AM

I just left an e-mail for Senator Landrieu:

About 40 years ago as a very naive 20-something, I was gang-raped by a group of 'friends'. At the time I blamed myself for allowing myself to be at the wrong place at the wrong time. It's what one did at that time.

Well, all of the pent up anger and rage of forty years has just been unleashed. I've worked my entire life, paying my fair share, doing the right thing, providing for my future and that of my children and grandchildren. Today, I feel that I have again been gang-raped, again by people I should have been able to trust...the elected representatives of the people of the United states.

Rest assured, I will spend the remainder of my life fighting as hard as I can to remove these 'trusted representatives' from a position to ever rape a citizen again.

Sen. Landrieau, you may feel that by the time you're up for re-election, we will have forgotten your treachery. I haven't forgotten that first rape forty years ago, I believe I will remember this one for a long time.

My only quibble: you wrote While you were sleeping, you came closer to losing some of your individual rights and freedoms.

'Some' is not strong enough because, once our health care is socialized, we will no longer own our own lives. The government will be able to regulate practically anything we do under the guise of 'protecting' our health.

Quoted from and Linked to at:
THESE DAYS
-----
It's Time To ROC 'N' ROLL:
Restore Our Constitution & Restore Our Lost Liberties