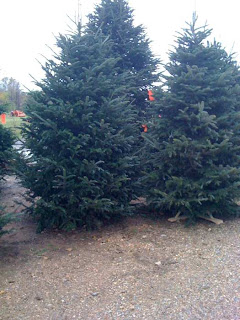 Apologies for the silence the past couple of days. Life got busy there for a moment and I had other things I had to concentrate on. Whoever came up with that saying that raising boys is so much easier than girls...well, they never had my teenager.

Beyond that, I decided last night that it was time to get the Christmas stuff out. I bought a tree this week (the one on the left, pictured) and it has stood silently in the living room awaiting lights and decorations. I gave some thought to "going green" and just leaving it be - au naturel - but decided against it. The Christmas spirit still hasn't just bowled me over yet, but I'm working at it. I hauled all the Christmas boxes out of the cedar closet and started working on the tree. I guess the spirit will come later this year.

Meanwhile, I haven't been blogging much over the past couple of days but a lot of other fine folks have, so let's see what's happening:

Professor Jacobson makes note of a possible prisoner exchange, and Troglopundit turns it into a discussion about bacon. Sort of.

Glad you liked the snow picture. My eight-year-old is on his third set of clothes for the day before lunch.