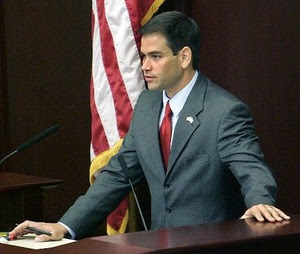 “Mel Martinez’s life is a testament to the boundless promise that exists in America, where a young Cuban exile can come to the United States without his parents and rise to become a Cabinet secretary and U.S. senator. As he looks ahead towards the next phase of his life, I wish him and his family all the best.

“As Governor Crist considers who he will appoint as Florida’s next U.S. senator, I urge him to take great care in his selection. Florida deserves an interim senator who will go to Washington and serve as a true check on President Obama’s push for more wasteful government spending, government-run health care and cap-and-trade. The last thing Florida needs is a U.S. senator that will stand with President Obama instead of challenging the wrong direction he is leading our country and offering constructive conservative solutions moving forward.”

Is that second paragraph a little dig at Crist who "stood with" Obama on the Porkulus bill and has "stood with" him on global warming until just recently? Could be.

I hope Crist takes Rubio's advice and appoints a true conservative, but somehow I doubt it. It all sounds like a backroom deal to me and I'm sure Crist already knows where he's going with this one, and I'm betting it is intended to work to Crist's advantage come election time. But, he could surprise me.