As the Gitmo Saga Continues, All Eyes on Thomson, Illinois 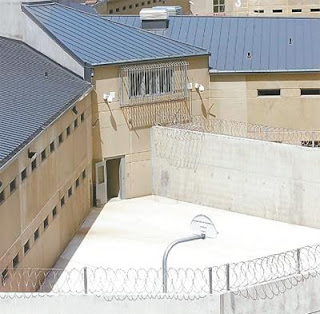 In the ongoing saga of what to do with the Gitmo detainees, since Obama insists the "model prison" at Guantanamo be shuttered, the latest target is the small town of Thomson, Illinois.

Thomson Correctional Center was completed in 2001 at a cost of $145 million, and sits about 150 miles west of Chicago, right on the Illinois border. It is a primarily maximum security prison that has remained largely unoccupied with the exception of the 200 bed minimum security unit. The town of Thomson has mixed feelings about the potential of housing Gitmo prisoners.

The Chicago Tribune went to The Sunrise Restaurant and a local pizza joint and took the pulse of several regulars there to gauge the town's reaction to the news. The general consensus seems to be that people just want the prison to be used and consider it a waste of government money for it to just sit empty. Small businesses and restaurants opened in Thomson in anticipation of the prison operating at full capacity and many of those have already given up the ghost and moved on.

Thomson Village President Jerry Hebeler displays an alarming naivete in speaking about the terrorists soon to be his neighbors when he says, "A murderer is a murderer no matter where he's from. That's the way I look at it." That is, I think, the crux of the misunderstanding about this whole business. You can't treat terrorists like common criminals because they aren't. 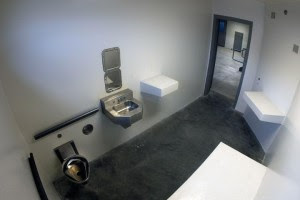 In fact, if this photo is of the maximum security cell at Thomson, a great deal of retrofitting will need to be done, because as they discovered at Gitmo, there are at least 15 potential weapons in this picture.

It would seem that many in Thomson are willing to exchange national security for a local economic impact.

Illinois Republicans aren't so enthusiastic about the idea. Representative Mark Kirk, a five-term congressman, says in a letter to the Illinois congressional delegation that "our state and the Chicago metropolitan area will become ground zero for Jihadist terrorist plots, recruitment and radicalization."

Republican Representative Donald Manzullo opposes the move, saying "The issue is: 'Are you going to exchange the promise of jobs for national security?' National security trumps everything."

Today, on Fox News Sunday, Mitch McConnell said, "I can't imagine the people of Illinois would like to have these prisoners incarcerated in their state. There may be some local officials who are going to support it, but I expect it will be a huge issue up in Illinois, probably in the U.S. Senate race up there next year."

There is also the question of legality. Can the prisoners legally be brought to U.S. soil, the very country they vowed to destroy. Currently, federal law prohibits bringing them here simply for detention. These would have to be prisoners that the administration intends to prosecute, unless legislation is changed.

The Thomson site is not a "done deal" as they say. Obama officials are planning to tour the prison this week and are also looking at other sites. Standish Max in Michigan has been mentioned, again, with mixed reactions from the community.

It still seems a bonehead idea to me, to close a "well run professional facility" simply because it has become a "black eye" for America, as Susan Estrich called it today. This administration is too concerned with what the world thinks about is, what with Obama going about bowing to emperors and kings, and apologizing for America from one end of the globe to the other. He cares little to none about what Americans think, or apparently, for national security.

Ignoring the advice of experts such as Michael Mukasey, who railed against the decision to bring Khalid Sheik Mohammed to the United States for trial, the administration continues to march toward the cliff's edge.

Mukasey said, "The plan seems to be to abandon the view that we are at war." Indeed, this administration seems to think sticking their collective heads in the sand is the way to victory. Ignore all expert advice (and the advice of your generals on the ground, for that matter) and full steam ahead.