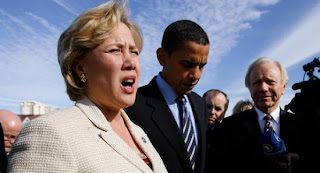 Saturday night we all saw what Mary Landrieu's going price is. Not only that, we saw her on the Senate floor adamantly defend her decision to sell her vote.

Now, WAFB in Baton Rouge raises the question of Bobby Jindal and his silence on the matter. Jindal is on the record in opposition to Obamacare, and as Secretary of the Louisiana Department of Health and Hospitals, he has some experience in that arena. During his tenure at DHH he turned a $400 million deficit into a multi-year surplus. On Obamacare he has said "Only Democrats in Washington would propose new taxes on businesses and families in the middle of a recession, $900 billion in new spending at a time of record deficits, and increased taxes on health insurance and products to reduce health-care costs."

In voting to move the debate forward on Obamacare, Mary Landrieu sold her vote for $100 million, and boasted from the Senate floor that it was really $300 million. Landrieu explained, as we are all familiar by now, that Louisiana's debit sheet made the state look much wealthier than it actually is following the aid influx of two hurricanes, and that Louisiana is "is poor as it ever was, if not poorer."

Landrieu also said she was responding to requests from Governor Jindal and his administration who have been lobbying Washington for more Medicaid help. Jim Engster, a Baton Rouge political analyst, says that "You hate to look a gift horse in the mouth and in this case, it was a Democrat, Mary Landrieu, who is an ideological foe, who came through with the bacon."

The thing is, this bill isn't about Louisiana. It's about the entire country. It's about growing government and taking over a huge section of the economic sector. It's about radically changing the health care system of the country towards inferior care, rationing, higher taxes, and job killing mandates.

Not just about Louisiana.

Jeff Sadow, political science professor at LSU-S, wrote that even if changes were made to make this horrible bill slightly better, which the debate supposedly allows, it's still a horrible bill: "For Landrieu to support something like that would be a dereliction of duty to do what is best for Louisiana and America. All the set-aside money for the state cannot obliterate this truth, illuminating the craven aspect of Landrieu which should not salve her conscience, if she really does support a slightly less obnoxious version."

WAFB contacted Jindal for an interview and he declined.

There really isn't much he could say though. There isn't much else anyone needs to say about Mary Landrieu. She will forever be remembered as Louisiana-Purchase-Mary.
Posted by Pat Austin Becker at 9:17 AM

We can thank her for taking that $300 million dollar bill from off top her nightstand compliments of Reid. Ol' skank. Where's the massive outcry from higher ups? I can't hear them.

She sold her soul. She'll pay a big price and I don't mean she might be voted out.