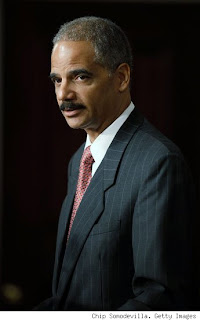 According to the AP, Eric Holder is defending his decision to hold KSM's trial in New York City, saying "I'm not scared of what (Mohammed) will have to say at trial — and no one else needs to be either."

I've already done the rant, so I won't go into that again, but I will suggest that this comment by Holder is just dumb. He misses the point entirely. Or at least, he pretends to.

First of all, nobody actually believes that this was his decision and that he made it without first getting approval from his boss. We're not that naive.

Second, it's not that we're "afraid" of what KSM will say, although nobody is looking forward to his bile and vitriol, but that we're concerned about KSM and his lawyers having unfettered access to hundreds of classified documents regarding intelligence gathering, methods, and evidence. Much of our intelligence operations will now be compromised. Certainly Holder hasn't missed that point.

Third, with regard to this administration's adopting a pre-9/11 approach to terrorism, Holder says "We are at war, and we will use every instrument of national power — civilian, military, law enforcement, intelligence, diplomatic and others — to win." Blather. You've now nullified the intelligence option, Mr. Holder. What you really want to do here is to put the Bush administration on trial. Period.

KSM and all the others should be tried in a military commission; Holder's excuse that the Twin Towers was a "civilian target" is worse than lame; he insultingly omits the Pentagon attack. Definitely NOT a civilian target.

To politicize the terror, fears, trauma, and loss of the loved ones in those attacks on 9/11 is simply despicable.

Meanwhile, Holder's boss seems to have the inside dope on the outcome of the trial. He told NBC's Chuck Todd, “I don't think it will be offensive at all when he's convicted and when the death penalty is applied to him.” Are you offering guarantees on that, Mr. Obama? No? I didn't think so. Good thing you weren't handicapping the Moussaoui trial.

(H/T: Memeorandum)
Posted by Pat Austin Becker at 9:03 AM

And, assuming a best-case scenario, in which KSM is speedily convicted, and sentenced to death, given the appeals, the appeals of the appeals, etc, he will meet justice in about 2025.

Assuming, of course, that he isn't 'sprung' by some swap of the lives of kidnapped innocents for his scurvy arse, or some future corrupt administration bought off by KSM's allies...

Given the fact that the attack on the Pentagon WAS a military target, and many lives were lost, isn't he eligible for miltary tribunal?

After all, they declared war on us.

Senator Lindsey Graham (R.-SC.) ranks high as a RINO, but in this instance he deserves KUDOS for standing up to this nonsense that Eric Holder is wanting to bring upon NYC and this nation.

Eric Holder is now trying to sound tough on terrorism by telling us not to cower to it. Where was he and most liberals the past eight years? Most of them savaging G.W. Bush for being a "cowboy".

I listened to Senator Graham literally "spank" the Attorney General for bein irresponsible, misinformed, and willing to put this country and its intelligence gathering capability on trial.

This is absolute madness and quite frankly suicidal.