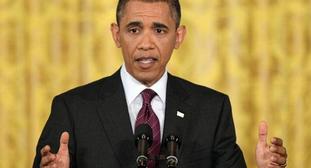 I've been in a state of disbelief for the past 24 hours over that Obama press conference yesterday, thus the blog silence.  I mean, what do you say to something like that?  Can you imagine Ronald Reagan ever giving such a petulant, angry, nasty speech pitting Americans against Americans like that?  Good grief.

Pundette did a great analysis of the speech here and here:

There's something wrong with his attitude below, as if governing the United States of America is some kind of game:


They’re in one week, they’re out one week.  And then they’re saying, Obama has got to step in.  You need to be here.  I’ve been here.  I’ve been doing Afghanistan and bin Laden and the Greek crisis.  You stay here.  Let’s get it done.

"Doing Afghanistan"? That's a disturbingly casual way to refer to a war in which Americans are risking and losing their lives. (And what, pray tell, is he "doing" about the Greek crisis?)

But one thing seems unclear: How does an attack on private jet travel square with his present efforts to wow Wall Street fat cats and the junkets to Vail, Martha’s Vineyard, and Costa del Sol? Or for that matter with the once tax-exempt Kerry yacht, the private-jet networking of green capitalist Al Gore, and Nancy Pelosi’s government-paid-for jet flights back to the Bay Area?

What I'm trying to square is how Obama can chide Congress and boast about how hard he's working on things yet he's off at this moment on another fundraiser (two of them today) and he refused the Republican's invitation to Capitol Hill today to work on the issues:

Jay Carney told the media earlier today that McConnell’s invitation was “not a conversation worth having.”  Sounds a lot like Obama’s own press conference.  It also highlights a particularly Democratic approach to bipartisanship, which is usually defined as Republicans agreeing to Democratic demands, which is more or less how Obama defined the supposedly bipartisan process that produced ObamaCare and Porkulus, both of which were written by Democrats without Republican input.

So the line yesterday was all about how we have to work together and get things done but today?  Well, today it's not worth talking to Republicans about anything.

I think Mark Halperin was right.
Posted by Pat Austin Becker at 3:47 PM

There is a legit question about lowering the level of discourse...but wasn't this the man-child who said during the Gulf oil spill "...I have to know who's ass to kick."