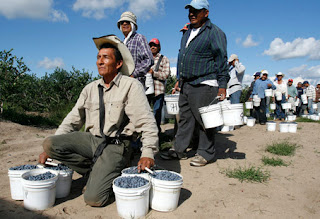 In an attempt to continue the infiltration of the United States by hoards of illegal immigrants, Mexico, "and the governments of several Central and South American countries filed court papers…in support of efforts to halt Georgia’s tough new immigration enforcement law," according to this post at Big Government.

The American Civil Liberties Union, the Southern Poverty Law Center and several other civil and immigrant rights groups filed a federal class-action lawsuit against Georgia's law this month and are now asking a judge to halt the measure pending the outcome of their case. They argue the measure – also known as House Bill 87 – is preempted by federal law and is unconstitutional.

The Southern Poverty Law Center has been busy protecting illegals lately.  The Alabama state legislature has passed a bill that  makes it a misdemeanor to rent property to illegals:

Once a violator collects ten violations (TEN!), the charge is upgraded from a Class A misdemeanor to a Class C felony.  This doesn't sit well with the SPLC:

Sam Brooke, an attorney at the Southern Poverty Law Center, says, “If you were a [landlord] found to have a number of properties and apartments with more than ten individuals, you could face up to 20 years. … [I]t’s incredible that they would have the audacity to do this.”

Hey Mr. Brooke, how about seeing to it that these people have proper papers?  If you want to help them, help them get proper documentation.

The Southern Poverty Law Center is dedicated to fighting hate and bigotry, and to seeking justice for the most vulnerable members of our society. Using litigation, education and other forms of advocacy, we work toward the day when the ideals of equal justice and equal opportunity will be a reality.

No objections here to fighting hate and bigotry; the SPLC should be using its resources to help illegals get legal papers rather than filing suit against lawfully passed legislation that upholds the United States Constitution.

In Georgia there are those who support the law:

Supporters of the law say that shows it is already working. They want the law to clear the state of illegal immigrants, who they say are taking advantage of Georgia's schools, hospitals and workplaces, draining public funds as they take jobs that could help the unemployed.

"I think we're the only country that allows people to come in and take over," said Sheila Bryan, 58, who cleans homes around Tifton, a farming community in South Georgia. "I'm sure there are enough legal people to do the work."

“This law is hurting us very badly because many workers are afraid and as Georgia is one of the few states that have this kind of law, they prefer to simply avoid Georgia and go to another state, Gary H. Paulk, owner of Paulk Farms & Vineyards, told Efe.

Paulk, who runs the farm with his father and brother, usually hires around 300 workers every year to harvest his grapes, blueberries and blackberries, but is currently short more than 100 field hands.

“Never before have we had problems getting qualified workers for our fields like now, and not only I, but all the other farmers are having problems and I think it’s due to the law,” he said.

Mr. Paulk laments the lack of "qualified workers" for his fields?  What are the "qualifications" that make blueberry picking so challenging?  I wish he'd explain "qualified" to me.

At any rate, now it seems that the courts will have to decide if Georgia's law will stand:

Nevertheless, Clinton appointee U.S. District Judge Thomas Thrash will ultimately decide, and has indicated that he “might rule from the bench …on the plaintiffs’ request to halt the law” on the first day of the hearing. The way Judge Thrash rules will determine whether Georgia, on behalf of the United States of America, wins or loses a battle against the unrelenting influx of illegal immigrants, the dictates of foreign countries, and the insane demands of liberal organizations that are oblivious to the safety and security concerns of America.

The law is scheduled to go into effect July 1.

Added:  You will remember that Obama felt free to espouse his opinon of the Arizona immigration bill; will he opine on the Georgia or the Alabama bills?  Memeorandum links to this report that Hispanics are miffed at Obama's non-appearance at their annual conference.
Posted by Pat Austin Becker at 2:31 PM

I hope that we wise up at some point and put a stop to all the illegals coming over the border. We cannot afford to support millions of people who have no skills. I know that most of these people are willing to work for a low wage which is attractive to a lot of employers. That means that when their families enter the country their wages are not enough to support them. This calls for free lunch, food stamps, free medical etc.

Hey Anonymous
Maybe I would be more inclined to agree with you if you had your facts straight, you can't get food stamps, free medical, and free lunch without a social security something Illegal immigrants don't have. How about we do something about bettering our neighbors condition so that there is no need for them to come over. Instead of pointing out your opinion how about you provide a solution?