Two Thumbs Up for Rep. Jeff Landry of Louisiana 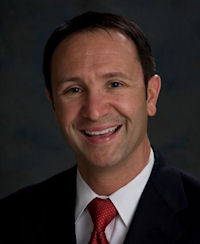 Two thumbs up for U. S. Rep. Jeff Landry (R.-La.)!!  In declining Obama's invitation to the White House this morning following last night's vote on the debt ceiling, Landry said,

“I have respectfully declined the president’s invitation to the White House today,” Rep. Jeff Landry (La.) said in a statement. “I don’t intend to spend my morning being lectured to by a president whose failed policies have put our children and grandchildren in a huge burden of debt.”

In his statement he also said:

“Until the president produces a responsible deficit reduction plan, I’m not going to the White House to negotiate with myself. Our conference has put out for months where we would start the process,”

Read the rest to see what he has to say about Obama's attention to the people of south Louisiana.  If Landry continues to stick by his guns like this, he'll do well in my book.

I'm glad to see this man stand up and state his opinions for all to see, and remember.

Good job, Mr. Landry! Our nation's politics can no longer be treated like a game where the unwary are led by "negotiations" into finally agreeing to the very thing they originally said "no" to.
I'm sure Mr Landry's clear and reasonable position, and his unwillingness to "go along to get along" reflects the straightforward expectations of the people who elected him.

Can you stop by the Speaker's office and put some spine in Mr Boehner.

Disgusting lack of respect for the president of the United States. Rejecting a trip to the white house is childish and is not "standing up" for one's opinions. I pray the people of Louisiana come to their senses in 2012, as the people in upstate NY did by giving the seat back to a Democrat for the first time in decades, thanks to Paul Ryan.

I don't suspect my comment will make it to the "approval" stage since I'm not exactly groveling and fawning over his post.

Runforfun54 is correct. The office of President deserves respect. Too bad we have a person in that office right now who has no respect for the office or the American people. Wish I could vote for Mr. Landry. I hope to God that the voters do wake up before the next election. This country cannot stand another 4 years of this adminstration.

Runforfun54, whatever drugs your on please pass them down, my back is killing me. No, Landry treated the man child like a man. He told him no to his face (practically). Lack of respect would be lying about a previous engagement. Oh, an aside, it’s “White House”, not “white house”.

Also, the Democrat is NY 26 didn’t even win the election. She was elected by plurality because a Democrat ran as a Tea Party candidate splitting the Republican vote. Leftist are trying to make this a retroactive referendum on the Ryan budget plan.

Sorry 54, you’re being very disjointed and expressing yourself very poorly. You put out assertions with no support in a very immature fashion. Now this is an adult blog and I’m not sure if you qualify...but that decision is for Pat to make. You know, the lady you insulted by saying would not publish you gibberish. Actually she did insult you...she let people read your tripe.

Quoted from and Linked to at:
Message To The Fredo Party: This Is How To Fight