Your Daily Affirmation From James Carville 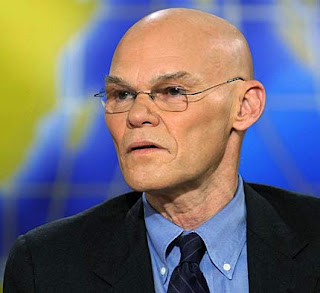 Via The Washington Examiner, James Carville thinks I'm an oddball:

"The self-identifying conservative Republicans who make up the base of the Republican Party stand a world apart from the rest of America," write Carville and Greenberg. Conservative Republicans, according to the Democracy Corps research, don't trust Barack Obama; are scared by the speed with which the president and Democrats in Congress are attempting to enact new programs; don't like government takeovers of business; and believe that many of their fellow Americans don't fully appreciate the threat posed by the Democratic agenda."

According to Carville, this makes me out of step with the rest of the country. So be it.

These are the conclusions of a report entitled "The Very Separate World of Conservative Republicans," a new report by Democracy Corps, the political research firm run by Democratic operatives James Carville and Stanley Greenberg.

The report also concludes that Republicans don't have a very high opinion of their own party. I'd say there is some accuracy in that as well; as long as the national Republican leadership puts candidates like Dede Scozzafava or Charlie Crist out there, who are really liberals with "R"s after their names, you bet that the conservative base is going to be unhappy.

Dede Scozzafava, for example, had the police respond to one of her meetings last night because reporter John McCormack made her "uncomfortable" when he asked her about card check, higher taxes, and abortion funding in Obamacare. McCormack's questions exposed her liberal bias, and I'm guessing THAT is what made her uncomfortable; not much the cops can do for her there.

One good bit of news in the Carville report, though. Republicans aren't racist:

After Republican Rep. Joe Wilson's famous "You lie!" outburst during Obama's address to Congress, commentators all over the media accused conservatives of outright racism. The Democracy Corps focus groups were conducted not long after the Wilson matter, and Carville and Greenberg were specifically looking for signs of racial animus. "We gave these groups of older, white Republican base voters in Georgia full opportunity to bring race into their discussion, but it did not ever become a central element, and indeed, was almost beside the point," Carville and Greenberg write. Race, they conclude, was "certainly not what was bothering them about President Obama."

Nope, it's just his policies we're concerned about. We could have told you that without a report from James Carville.

More on the Scozzafava story at Memeorandum, or McCormack's account here.
Posted by Pat Austin Becker at 6:28 AM

Here"s another revealing quote from Carville: "Ideologies aren't all that important. What's important is psychology.

"The Democratic constituency is just like a herd of cows. All you have to do is lay out enough silage and they come running. That's why I became an operative working with Democrats. With Democrats all you have to do is make a lot of noise, lay out the hay, and be ready to use the ole cattle prod in case a few want to bolt the herd.

"Eighty percent of the people who call themselves Democrats don't have a clue as to political reality.
What amazes me is that you could take a group of people who are hard workers and convince them that they should support social programs that were the exact opposite of their own personal convictions. Put a little fear here and there and you can get people to vote any way you want.

"The voter is basically dumb and lazy. The reason I became a Democratic operative instead of a Republican was because there were more Democrats that didn't have a clue than there were Republicans.

What does it say about his wife?