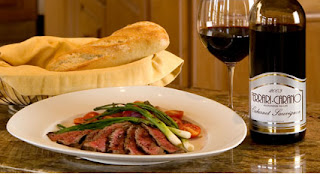 My Saturday?  It looks like this:  minor housecleaning, laundry, then Steve and I are going to run out on base and do the grocery shopping.  Back in time for the second half of the LSU/Alabama game (it's damned inconvenient for me that they kick off at 2:30 today), and then we'll get dressed up and go to dinner tonight at The Vintage.  You remember back at Oktoberfest I won a gift certificate in the costume contest. We're going to cash that bad boy in tonight.  I wouldn't normally pay $50 for a steak (and that's JUST the steak), but I won't turn it down!

So much to do, then, I better get to it.

I saw this Rachel Maddow blather and started to do a post on it earlier, but William Teach did a fine job instead.  I personally could care less about Keith Olberman or that he was fired.  I could take some principled stand over the First Amendment and all that, but I suspect Olberman knew he was violating some rule when he did what he did.  And besides, on a smaller scale, it's not very unlike the civil service employees who can't put political bumper stickers on their private vehicles or campaign signs in their yards.  You know it's the rule, you agree to forfeit those rights when you take the job, and there you go.  It is what it is.  Besides, Olberman?  Really.  Who cares.

Jimmie Bise isn't losing any sleep over Olberman either. Sister Toldjah also ponders the issue.  Michelle Malkin is having none of it, either.  "No Freakin' Way!"

Professor Jacobson, as you've heard by now, has taken in a co-blogger.  Good things to come, I'm sure!

Doug Ross posts on all those mysterious ballots they keep finding all over the place; The Lonely Conservative has noticed these ballots, too.

Another Black Conservative has thoughts on the Michelle Bachmann leadership position.  I like her, but I think he's right here.

Left Coast Rebel has an Open Letter to John Boehner.

This Oklahoma anti-Sharia law is going to get interesting and Donald Douglas brings you up to speed on that.

At The Other McCain, Smitty is pretty much done with Peggy Noonan.  A classic smack down.

Bob Belvedere calls our attention to a spot-on Glenn Reynolds quote.  It's true.

Awwww man!  Twenty freakin' years ago?  Damn I feel old.  But I love this song over at Protein Wisdom.  Oh the memories.  This song is on my iPod.

Speaking of music, Reaganite Republican has a classic that I LOVE.  Also on my iPod.

Da Tech Guy has new Blogs 'o the Month; I was so honored last month!

No Sheeples Here has a reminder about Project Valour.

Fishersville Mike has a probing question.

Speaking of probing questions, Mind Numbed Robot also has one.  More indoctrination of your children.

Over at Obi's Sister, you can read about the Mexican drug cartel in Atlanta.

What happens when pot becomes legal?  Go to A Cop's Watch.

And finally, STOP the presses - Bride of Rove is at a loss for words.  I don't believe it; she just must not have had enough coffee yet.  I'll wait.  She'll say something.

I'll leave you with Marco's GOP Response this week, because I do love Marco:

Happy Saturday!
Posted by Pat Austin Becker at 10:15 AM

Thank you, Pat, for the link and for another fine collection of posts to check out.

Mmmm...steak. Nothing like a steak and an ice cold Coke or a Sam Adams Lager.

Thanks for linking to Project Valour-IT. I hope your readers will consider a donation to this worthy cause.

Much obliged for the link, Pat.

Aw! Hey Pat that means alot. I totally miss blogging with all you folks. I don't have home internet and it is driving me insane. I know I have totally fallen off the radar with a lot of people and that sucks. I miss the bejesus out of you all so much it makes me wish I had a desk job just so I can "hang out" more. Thanks for keep[ing me in mind. You just made my night.