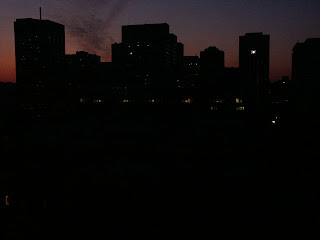 Drudge is all afire over the coming rolling blackouts that will likely happen as a result of Obama's pledge to bankrupt the coal fired power plants.

Man, he said out loud what he was going to do and people voted for him anyway.  Nobody that voted for Obama has the right to utter one single solitary complaint when their electricity cuts off for several hours.  When it's 108 outside and it's your turn for your power shut down, just sit there and chant "Yes, we can...." over and over.  Hope 'n change, baby.

Rolling blackouts are a common or even a normal daily event in many developing countries where electricity generation capacity is underfunded or infrastructure is poorly managed. Rolling blackouts in developed countries are rare because demand is accurately forecasted, adequate infrastructure investment is scheduled and networks are well managed; such events are considered an unacceptable failure to plan and can cause significant political damage to responsible governments. In well managed under-capacity systems blackouts are scheduled in advance and advertised to allow people to work around them but in most cases they happen without warning, typically whenever the transmission frequency falls below the 'safe' limit. Due to the shortage of electricity, load shedding is extremely common in India.

We are now a "developing country."

And when you do have power it will cost you more.

The state of Texas is not a bit happy about the impending blackouts (emphasis mine):

The critical importance of electric generation adequacy was brought home as the Texas PUC was finalizing these comments. On August 2 and 3, 2011, temperatures across most of Texas ranged from 105 to 111 degrees. Because of the unseasonably hot weather, the ERCOT (Electric Reliability Council of Texas) region of Texas set a new peak demand record of 68,294 MW, blowing through the 2010 record of 65,776 MW. Although ERCOT avoided the need for rolling outages because of its current electric reserves, the ERCOT grid operated very close to its capacity. It is clear that, had the EPA rules discussed in these comments been in effect, Texans would have experienced rolling outages and the risk of massive load curtailment. Our modern economy depends upon a reliable source of electricity, and outages, rolling or otherwise, cost Texans millions of dollars.

How are the elderly and infirm supposed to deal with rolling blackouts in 110 degree heat?

Hell, we had a transformer blow up in one of our suburbs recently and the repair time was initially estimated at 12 hours.  People began freaking out and demanding the the city open "cooling centers" and that they be allowed to take their pets along.

Ezra Klein links to a report which says this is all much ado about nothing.  Yes, he says, many coal power plants will shut down, but hey, they were archaic anyway!  No big deal!

The Congressional Research Service concedes that retrofitting these plants will be expensive and your energy bills will be higher but you'll benefit in the end with robust good health!

We are now living in a nanny-state third world country.  Stock up on generators and batteries.

Pat, I'm seriously looking at solar. It's not perfect, but it'll do in a pinch. And, the EPA is pinching the industry hard.

I swear, the left is screwing both ends against the middle...demanding MORE of everything, and hindering production of anything.

We gotta destroy them for their own good...

Well that's just great. Shades of California a few years back. I used to tease my coworkers about living in Texas, where we had modern conveniences like indoor plumbing and electricity.

Speaking of plumbing, our town is just now installing a sewer system - and it is powered by electricity at each home. So power outages will also mean no flushing!

We have a generator leftover from Hurricane Claudette that we could plug the freezer and a window unit into. Having a fan to sleep under while the power was out was a huge help.

People just must remember to never bring the generator itself inside, it must stay outdoors and run an orange power cord from it into the house.

Hopefully our legislators will find a way to ignore the EPA and head this off. Maybe some crisis legislation or something.

Maybe if give him four more years, we can fully live out our third world country fantasies...