U.S. Credit Rating Electric Sliding Away Across the Rose Garden

I've immersed myself in antiquing activities today in an attempt to avoid the glaring headlines on Memeorandum: 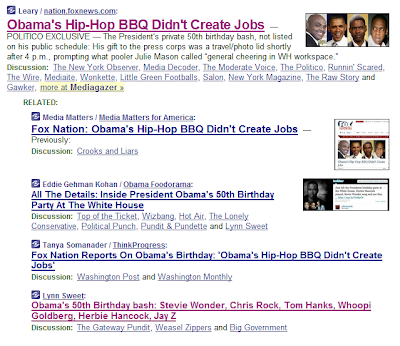 That, and yesterday's stock market meltdown.  And today's downgrade of the United States credit rating

Pundette did a great job this morning covering the birthday bash so please be sure to read her post.  Favorite quote?  This one:

"That's when everyone's shoes came off, and things kicked into high gear with barefoot jammin.' Among other dances, guests did the Electric Slide, which impressed Chris Rock so much he tweeted about it..."

The Electric Slide -- isn't that the dance Wall Street did yesterday?


You know, all I want to add to the debate is to give Obama's handlers a little (a little) credit for realizing how bad the godforsaken run-over-dog-crazy optics a photo of Obama doing the Electric Slide barefoot in the Rose Garden while the stock market crashes and the credit rating goes down would be.


Are you kidding me?!


The press is bad enough.  The visuals would be devastating.


Of course, the Obama media minions are all ablast calling the Fox Nation headline "race baiting!"  Gasp!  They used the word Hip Hop!  Racists!  They used a photo of Obama with his black guests!  Racists!  Horrors!

Here is your dumb racist Fox Nation headline screengrab accusing Obama of some kind of secret anti-employment Black Panther birthday celebration, because “hip-hop” is the acceptable derogatory term for “black people things” if you are an old white racist who reads Fox Nation.

At Fox Nation, this kind of ugly right wing race-baiting is daily fare.

U.S. job growth accelerated more than expected in July, but the top story at Fox News' Fox Nation blog Friday seemed to imply that the economy would have created even more jobs if President Barack Obama didn't have so many black friends.

Nobody begrudges Obama a birthday party.  Grow up, people.  All anybody can hope to expect is that he exercise a little taste.  Apparently that's too much to expect.

Is THIS tasteful, OR tactful: 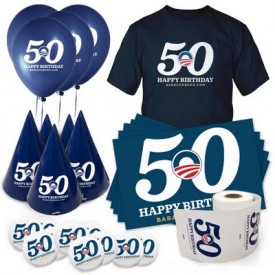 Why does he have to be so ostentatious about it?  Why, on a day when the stock market plummets and in a time when unemployment hovers at 9.1% (or  9.2%) and people are dependent on welfare, food stamps, two years of unemployment checks, when Americans are in three wars; when our credit rating is downgraded for the first time in history and everyday Americans are scared to death their maxed out credit cards and mortgages are going under water, why does this president feel that it's in good taste to do the Electric Slide across the Rose Garden?

Let me remind you one.more.time. what George W. Bush said about why he quit playing golf:

President Bush said yesterday that he gave up golfing in 2003 "in solidarity" with the families of soldiers who were dying in Iraq, concluding that it was "just not worth it anymore" to play the sport in a time of war.

"I don't want some mom whose son may have recently died to see the commander in chief playing golf," Bush said in a White House interview with the Politico. "I feel I owe it to the families to be as -- to be in solidarity as best as I can with them. And I think playing golf during a war just sends the wrong signal."

One more time, Mr. Obama:  people are hurting and it's going to get worse.  Put up the party hats.  Put away your golf clubs.  Cancel the Martha's Vineyard vacations and the Hawaiian trips.  Rethink this liberal path of destruction and get the hell out of the way of good government.

Maybe Rick Perry is onto something.

Wonder if I could get some sort of 2 for 1 discount if I got a Tuscon Massacre Memorial Pep Rally T-shirt with an 0bama 50th B-day shirt.