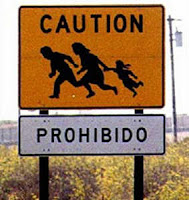 Eric Holder's DOJ and the Obama administration have filed suit on yet another state for their attempt to control illegal immigration in absence of the feds attempt to do so.

This time it's Alabama.


I'm trying to find an example of "the federal government's enforcement of immigration law."  I'll let you know if I find one.
Posted by Pat Austin Becker at 7:09 PM

You are right. There is no serious attempt by the federal gov. to control our borders. They want as many illegals as possible so they can give them legal status therefore having another block of voters. It is a sad situation when a state tries to defend itself from an invasion and the feds take the side of the criminals.