Is He, or Isn't He? Gamechanger! 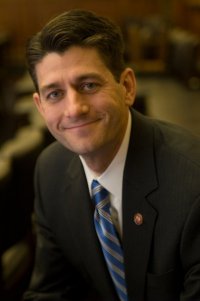 Wisconsin congressman Paul Ryan is strongly considering a run for president. Ryan, who has been quietly meeting with political strategists to discuss a bid over the past three months, is on vacation in Colorado discussing a prospective run with his family. Ryan’s concerns about the effects of a presidential campaign – and perhaps a presidency – on his family have been his primary focus as he thinks through his political future.

"While grateful for the continued support and encouragement, Congressman Ryan has not changed his mind," spokesman Kevin Seifert said.

What does that mean?  Can we parse that to pieces?  He hasn't changed his mind as of now, but is he considering it?

Ryan has been pretty emphatic and certain.

I've been of the mind that Ryan is just so "wonky" about policy that he just really wants to be in the House; I'm under the impression that he thinks he can be more effective right where he is.  But I'm not in his inner circle, you know.

What a conundrum this is.  Ed Morrissey says no:

As a Presidential candidate, however, Ryan lacks the background that gives confidence in an ability to handle the executive branch.  Like the other aspirants from the House already in this race, Ryan lacks any executive experience at all, in either the private or public sector.

If Ryan ever wants to run for president, he should definitely do it now. He’d handle himself well, and there’s no qualification for running for president in Republican politics quite like having run for president before. He’d have a leg up in 2016 if Republicans don’t win in 2012. And one of Obama’s lessons is to run even when it’s “too soon” . . . because you just never know.

And both make such valid points!

As for Rick Perry, well, his entrance into the field absolutely changed things:

The latest Rasmussen Reports national telephone survey of Likely Republican Primary voters, taken Monday night, finds Perry with 29% support. Romney, the former Massachusetts governor who ran unsuccessfully for the GOP presidential nomination in 2008, earns 18% of the vote, while Bachmann, the Minnesota congresswoman who won the high-profile Ames Straw Poll in Iowa on Saturday, picks up 13%.

And just look at all the venom being hurled Perry's way - a sure sign they're worried about him.

Like Pundette, I have "one foot tentatively placed on the Rick Perry bandwagon" but this could shake things up.

If Palin got in, it would REALLY shake the polls.

If Paul Ryan had jumped in a month ago, I'd be thrilled, but I think if he jumps in now, it'll be like Fred Thompson. He needed to beat Perry to the punch.

Also, even if he does do well, I think a lot of older folks would not vote for him. To quote my grandfather who usually falls in line with the old folks, "He's great but still a little young. Let your generation elect him."

And it saddens me to say all this b/c that was my #1 choice before anyone jumped in.

This GOP "Beauty Contest" is the greatest joke in years. When are Pat Robertson and/or Ralph Reed going to "test the waters"? The Donald II?? The Rudy, anyone? This ought to be entertaining!

For the time being, we need Paul Ryan to stay in the House of Representatives. He will be very much needed there as Obama serves his second term. I would definitely support Paul Ryan's run for the presidency in 2016.