There is something about New Orleans today that feels like a crime scene, like something terrible has happened there. It is a raw, sort of apprehensive feeling,  like you shouldn’t be there. It's like a gaping wound.

The twenty-five foot bronze statue of Confederate President Jefferson Davis was ripped from its granite pedestal about 5 a.m. this morning by city crews hiding behind masks as monument supporters quietly sang “Dixie.” Some stood and solemnly saluted the desecrated statue of Davis as it was moved to the flatbed truck nearby.

Days before the removal, the monument was virtually imprisoned behind barricades and cyclone fencing after violent clashes between monument supporters and the Antifa/Take ‘Em Down groups.

Crews gathered around the statue just after midnight last night, partially wrapped the statue’s mid-section in green bubble wrap, tied a thick yellow strap around the torso, and lifted the statue, which was slowly spinning, Davis’s arm pointing at both demonstrators and supporters as the statue twirled in mid-air.  A makeshift crate was placed around Davis and crews lowered the statue onto the back of a flatbed truck and hauled it off to an undisclosed warehouse.

The pedestal is another matter – it took the untrained city contractors and firefighters several more hours to figure out how to remove the heavy granite pedestal which sat most of the morning with a limp strap around it while engineers phoned into television stations warning that if it was lifted it would probably tip over. It is as if Jefferson Davis himself was mocking them, declaring his right to be there as the inscription on the pedestal reads, “His name is enshrined in the hearts of the people for whom he suffered, and his deeds are forever wedded to immortality.”

Arlene Barnum was there last night. She came to New Orleans as soon as Mayor Landrieu had Liberty Place monument removed two weeks ago; she’s been there standing guard at the Jefferson Davis monument day in and day out with her battle flag and a growing crowd of supporters.

Arlene is a 63-year old black woman from Oklahoma, an Army veteran, and a woman with Confederate ancestors from north Louisiana. She felt that as Davis was “the one and only president of the Confederacy,” she was obligated to stand with him. As she stood at the monument, Arlene has been called a variety of racial slurs: “Aunt Jemima” seems to have been the most offensive to her. Her truck tires were slashed, her cell phone was knocked from her hand as she tried to live stream, and she has gone without much sleep.

Arlene has been dubbed “General Arlene” by some of the other monument supporters standing guard with her, and they have followed her lead. She has encouraged peaceful protest and non-violence.  “Fly those flags high,” she would shout, “Keep ‘em up! Don’t let that flag touch the ground!” Last night she had Pastor Larry Beane from Salem Lutheran Church lead the crowd in a prayer service before the city workers came to dismantle the monument.

Mitch Landrieu spent the evening hobnobbing with donors at the home of Mary Matalin and James Carville for Mitch Landrieu’s NOLA Pac.

This morning Landrieu issued a statement:

After nearly two years of planning and court battles, City officials began the process today of removing the three remaining monuments that prominently celebrate the “Lost Cause of the Confederacy.” The statues that are being removed were erected decades after the Civil War to celebrate the “Cult of the Lost Cause,” a movement recognized across the South as celebrating and promoting white supremacy.

There are four prominent monuments in question. The Battle of Liberty Place monument, which was removed three weeks ago, was erected by the Crescent City White League to remember the deadly insurrection led by white supremacists against the City’s racially integrated police department and government. The statue coming down today is the Jefferson Davis statue on Jefferson Davis Parkway. The statues slated to come down next include the Robert E. Lee statue at Lee Circle and the P.G.T. Beauregard equestrian statue on Esplanade Avenue at the entrance to City Park.

“Three weeks ago, we began a challenging but long overdue process of removing four statues that honor the ‘Lost Cause of the Confederacy.’ Today we continue the mission,” said Mayor Mitch Landrieu. “These monuments have stood not as historic or educational markers of our legacy of slavery and segregation, but in celebration of it. I believe we must remember all of our history, but we need not revere it. To literally put the Confederacy on a pedestal in some of our most prominent public places is not only an inaccurate reflection of our past, it is an affront to our present, and a bad prescription for our future. We should not be afraid to confront and reconcile our past.”

This is a terrible slippery slope and there will be no end to it. Soon New Orleans will be no different and no more unique than any other city in the country once it is cleansed by Landrieu and his cronies. Well, except for the highest murder rate distinction; there's still that. It's clear by his statement that Landrieu totally misunderstands the purpose of the monuments. They were not erected to promote white supremacy but to honor the dead who fought to defend their homes and families.

It's not only that Landrieu is trying to rewrite and erase history, which as we all know is a mistake and impossible, but the fact that he cares so little about the constituency in New Orleans that is troublesome.  Remember, this issue was never put before the voters but was decided by a city council after very limited public input sessions. The outrage and protests on both sides have ripped the city apart and caused many to vow to boycott the city.

Interestingly, it's not the African-American constituency that it so outraged by the monuments but white, liberal young people who mostly make up the Antifa crowd and who have been the most vulgar and violent in all of the live-stream videos we have seen. If it is this group of people we are "cleansing the city" for, they can have it; I want no part of it. 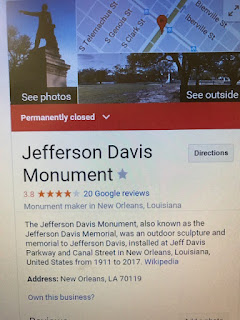 It took no time at all for Google to change its page on the Jefferson Davis monument; by 11:15 or so it was already altered to "Permanently Closed."

It will of course be interesting to see how fast the murder rate drops in NOLA now that two of the four monuments are down.

Which will be next? Lee or Beauregard? Anyone want to make bets on how long Andrew Jackson gets to stay? Despite ones feelings about the message the monuments may or may not send, all of these are works of art that were commissioned by the people of the period, paid for by private donations and fundraisers, and presented as a gift to the city. They have stood for decades and have become part of the landscape and pay homage to those who came before us.

Nothing is left of Liberty Place monument or the Jefferson Davis monument but an ugly concrete slab and ugly videos of TEDNola and Antifa acting in an ugly fashion.

Posted by Pat Austin Becker at 4:40 PM No comments: 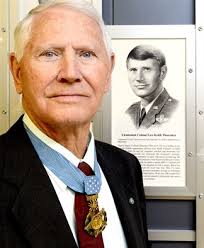 I originally posted this eight years ago, in April 2009. Reposting to remember the life of Leo Thorsness who died today at the age of 85. Rest in peace, sir.

I mentioned last week that I'd ordered Surviving Hell by Leo Thorsness; I finished it last night.

Thorsness, as you may know, was a POW for 6 years in Vietnam and was at the Hanoi Hilton. I was lucky enough to meet him several years ago when he came to the school where I teach to speak to our students.

NRO recently excerpted the chapter where Thorsness and his cellmates (at times he was in solitary and other times with cellmates) were determined to have a church service on Sundays.

Thorsness has an easy writing style; the book reminded me of Lone Survivor by Marcus Luttrell in the fact that I just could NOT put it down. I couldn't put Lone Survivor down until "I" got Marcus off the side of that mountain in Afghanistan and I was the same way with Leo. Until "I" got him out of that cell, I had to keep reading.

He tells you, of course, that he was tortured and a little about that, but that's not the focus of the book.  He writes of how they got through the days (the "Tap Code" was like POW texting! An ingenious system!) As Gary Sinise said in his jacket-blurb: "Surviving Hell tells it like it was in combat and in prison, but the story is also uplifting and helpful for anyone going through tough times. Leo is a survivor who shows us that, even in hell, we are much stronger than we think."

At 127 pages, there's no excuse for anyone not to read this book.

I'll leave it with this story he told about his cellmate Mike. Mike scrounged a small piece of fabric from the bath area one day. All the cellmates pitched in a tiny chip of precious soap so Mike could wash his fabric.

Posted by Pat Austin Becker at 4:05 PM No comments: