Take a Trip to Scottsville Cemetery in Harrison County Texas

With an urge to get out of town for a few hours, Steve and I piled into the Jeep this morning and headed for East Texas.

Steve has had an urge to visit an old general store in Jonesville, TX (that's another post to come) and so we headed west on Highway 80 (we don't like interstate) and overshooting Jonesville by several miles, we ended up first in Scottsville, Texas, which  is about five miles east of Marshall in Harrison County, Texas. There's not much to Scottsville and at its best only boasted about 300 people. What's notable these days about the place is the stunning cemetery there on Farm Road 1998.

The town of Scottsville was founded by William Thomas Scott who was born in Mississippi in 1811; his father, Thomas Scott, was a planter who fought heroically in the Battle of New Orleans. He sustained wounds from which he would never recover and died in 1823. His son, William Thomas Scott, went to work in a store in Mississippi which enabled him to prove himself, enter into a partnership with the owner of that store, and to save enough money to buy land. He married and brought his bride to Texas in 1840 where he founded Scottsville.

William Thomas Scott established five cotton plantations and he built a home that reportedly was modeled after Beauvoir, the home of Jefferson Davis in Mississippi. He was a proponent of the railroad and had an active legislative career, serving in the House of Representatives for the Republic of Texas, the state Senate, and in 1861 he was a member of the Secession Convention.

During the Civil War, it is reported that his plantation provided provisions for the Confederate troops.

Scott and his wife had perhaps ten children and the eighth was a daughter,  Mary Elizabeth (Betty) Scott who would eventually marry a fellow named Peter (Pete) Youree who was born and educated in Missouri. When the War Between the States broke out, Pete Youree was 17 years old; he volunteered to serve with Company A of Shelby's Missouri cavalry in 1861. He was wounded two times, once at Shiloh and once at Helena; by the end of the war he was captain of Company I, Slayback's regiment, Missouri Rifles.

Youree was honorably discharged from the war in Shreveport where he stayed and in 1870 he married Betty Scott. The Yourees began to establish themselves in Shreveport and Pete worked as a clerk, saved his money, invested wisely, and eventually established the electric streetcar system in Shreveport and he worked as Vice-President and later President, of Commercial National Bank. He was also instrumental in building the McNeil Pumping Station: Shreveport's waterworks, which is a fascinating museum to visit today. 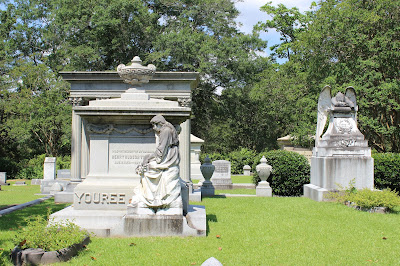 Betty was elected President of the Shreveport Chapter #237 of the United Daughters of the Confederacy in 1898, a position which she held for two years, and then was re-elected as President of the organization in 1904 and served until 1926.

Pete Youree was obviously a supporter of the Confederacy and he donated a monument to the UDC which stands in Greenwood Cemetery in Shreveport. That monument is similar to this monument that stands at the entrance of the Scottsville cemetery although the engraving is different, of course.


The Greenwood cemetery monument names Youree as the benefactor while the Scottsville monument lists the names of the family's Confederate dead on one side...


Both were by Frank Teich and both have the lone soldier with arms at rest at the top.

Youree had an apparent love for statuary and classic art. The cemetery at Scottsville is a testament to that. The cemetery is filled with beautiful monuments and sculpture as well as a stunning chapel built in the memory of his son.


As beautiful as the chapel is, what most people seem drawn to is the weeping angel statue, entitled Grief, or sometimes called Weeping Angel.


Her arm is broken and she needs cleaning, but my goodness she is something to see.

She was sculpted by artist Frank Teich from Llano, Texas who also created many, many of the Confederate monuments in this area, including the stunning monument in front of the Caddo Parish Courthouse.

The angel is ten-feet tall and carved from Carrara marble from Italy. She reportedly cost $40,000 in 1904.

The cemetery is filled with beautiful sculpture: 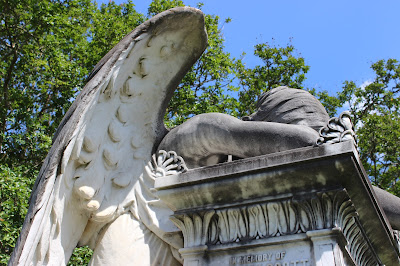 There are some tragic mysteries too - I was struck by these three tiny graves. Infant children - two died at age two and one at age 3.


There are many Confederate graves there, most marked with the First National Flags, likely from a recent Confederate Memorial Day event. 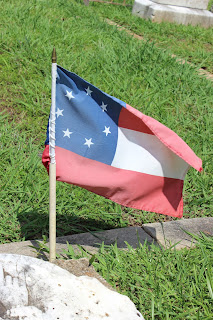 The cemetery has many other beautiful pieces of statuary and is quite old. The landscape is beautiful, atop a hill and filled with hardwoods, walnut trees, and magnolias. 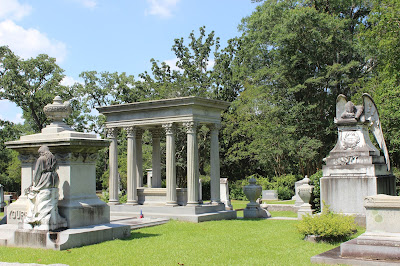 It's worth the short drive from Shreveport to visit the Scottsville Cemetery.


If you like this story please Share it and if you LOVE this story, please Donate by hitting the button at the top of the sidebar!