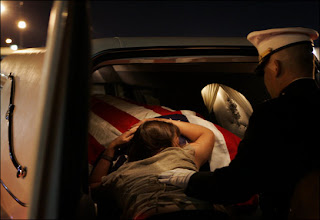 On this Memorial Day weekend, the WSJ has an interesting history lesson for us regarding the transport of our war dead:

Bringing fallen troops home is a relatively modern idea. Until the late 19th century, military authorities did little to differentiate and identify dead troops...The modern system for cataloguing and burying military dead effectively began during the Civil War, when the enormity of the carnage triggered a wholesale revolution in how the U.S. treated fallen troops. Congress decided that the defenders of the Union were worthy of special burial sites for their sacrifices, and set up a program of national cemeteries.

During the war, more than 300,000 dead Union soldiers were buried in small cemeteries scattered across broad swaths of the U.S. When the fighting stopped, military authorities launched an ambitious effort to collect the remains and rebury them in the handful of national cemeteries.


In both World Wars families were given a choice regarding the burial of their loved ones; they could be brought home or buried in overseas cemeteries - Normandy, for example.  And, oh, the Pacific:

World War II posed a bigger logistical challenge, since American war dead were scattered around the globe. Nearly 80,000 U.S. troops died in the Pacific, for example, and 65,000 of their bodies were first buried in almost 200 battlefield cemeteries there.

Once the fighting ended, the bodies were dug up and consolidated into larger regional graveyards. The first returns of World War II dead took place in the fall of 1947, six years after the attack at Pearl Harbor. Eventually, 171,000 of the roughly 280,000 identified remains were brought back to the U.S.

The process has improved since then and time delays for the return of fallen warriors are not what they were.  Those that are charged with the job of returning our war dead to their families take their task very seriously and very hard.  The emotional toll is tremendous but it matters a great deal to them that the families know that their fallen are being treated with love and respect every step of the way.

TIME has a photo essay here, and if it doesn't bring you to tears, you're made of stone.

We are burying one of our local soldiers today, Spc. Joshua Tomlinson, and the entire area is grieving.  It hits home all over the nation.

Take a moment this weekend to remember the fallen, and their families, and those that have brought them home.

Cross posted at Pundit and Pundette

Pat, that is interesting. Thanks for posting it. I read something a few years ago that I found interesting.

It was an article about the fact that there will not likely ever be another interment in the tomb of the unknowns. It hadn't crossed my mind before. But, with modern technology, we can now identify every slain service member, and return them to their families.

I think that's a good thing. Good job. Have a great weekend.

Oh, and on your ObozO at Grand Isle post. Pffffft! The guy is feckless.

Linked to at:
Their Truth Is Marching On: Memorial Day 2010