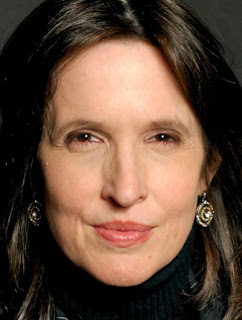 Is there anyone more clueless than Katrina vanden Heuvel about Tuesday's election?

Now look - I don't think Republican's ought to be gloating about this victory.  It's wonderful, thrilling, and historic, but (and I hate this expression...) let's be clear about what it is.  It was a referendum against Obama's far left socialist type agenda.  Americans across the country made that clear in their Tea Party protests, their town hall meetings, and their various marches on Washington.
Yet here is vanden Heuvel:

This was an unearned win for the Republican Party. The election was fundamentally about one thing—the rotten economy—and Democrats paid the price as voters expressed their discontent. Conservatives in both parties who claim the vote represented an ideological shift to the right are plain wrong.

She's missing the fact that, in truth, America is a center-right nation.  The far left agenda of this administration is simply overreach.   There was no shift - she's right about that.  Just a return to the norm.

No, according to vanden Heuvel, the opposite is true:  the Democrats lost because they weren't liberal enough:

The quickly congealing conventional wisdom is that President Obama tried to do too much and was too liberal. The opposite is true: Voters were alienated because they didn't believe his team had fought aggressively enough for the interests of working- and middle-class citizens.

A frightening thought, to be sure. She says the Stimulus was inadequate.  It should have been more and it's the darn Republicans fault that it wasn't. To vanden Heuvel and other Democrats I've heard since Tuesday, it's still all about the economy.  This is a message they'd do well to rethink unless they want to lose control of the Senate as well; Americans are indeed concerned about jobs and the economy.  That's what we wanted Obama to focus on rather than a massive health care takeover and government power grab.

And I'm not sure which Obama she's been listening to when she claims the president "remains committed to a politics of 'civility and common ground'."  I don't think he ever looked for much common ground ("I won!")  and I haven't seen any civility lately.  I recall him calling me an "enemy" just last week and telling me to "sit in the back" of the bus he's trying to drive over the cliff.

No, vanden Heuvel demands he fight for government that benefits the "majority of Americans" but the majority spoke Tuesday night, and they're tired of his helping them.  He's NOT helping them.  Obama's policies are about to further cripple the economy, job growth and raise taxes come January.

I don't need that kind of help and clearly that's what Americans were rejecting Tuesday.

Added:  Oh wait...in answer to my own question, I see there IS someone more clueless, or at least as clueless.   Looks like Paul Krugman and vanden Heuvel got the same talking points this week:

Mr. Obama’s problem wasn’t lack of focus; it was lack of audacity. At the start of his administration he settled for an economic plan that was far too weak.

I'm not always the brightest color in the box, so someone might ought to explain this one to me:

And when Mr. Obama took office, America had just suffered its worst financial crisis since the 1930s. What the nation needed, given this grim prospect, was a really ambitious recovery plan. Could Mr. Obama actually have offered such a plan? He might not have been able to get a big plan through Congress, or at least not without using extraordinary political tactics


With a Democratic majority at the time, why couldn't he have gotten it through Congress?  He showed no aversion to "extraordinary political tactics" when it came to ramming ObamaCare down our throats.

Krugman and vanden Heuvel's advice to Obama to dig in and "take a stand" is likely what he will do, and that's fine, too.  2012 is just around the corner.
Posted by Pat Austin Becker at 5:24 AM

Is there anyone more clueless than Katrina vanden Heuvel about Tuesday's election?

There are lots of clueless people out there about Tuesdays election.

On the other hand Glenn Beck and Larry Leon have made some excellent points about Obammy being a mere puppet of George Soros..bought and paid for.....Beck has been doing an excellent series this week that concludes today with his disclosure of the puppeteer (he has made it apparent who he is talking about already or as he refers to him, the Spooky Dude) and what Soros is out to accomplish..been a very educational series so far......with all the money Soros has donated to lost liberal causes he could have created enough jobs to reduce the national unemployment rate..and why such a big donation to legalize pot in California..is he a behind the scenes dope dealer?

Here in Louisiana I am revitalizing the Klan to start burning crosses and hanging nooses on the lawns of Democrats instead of blacks...sign up now.
Don't you love dark humor?????!!!!!

I am content as one of the people who admits she is a liberal democrat, that the GOP is now in charge of things in Washingotn and most of the states of the union.

The great gnashing of teeth and pitch forks have gotten the attention to all those willing to be lead them down the garden path. Now the problems that have been so loudly voiced will be solved. Not paying taxes will result in no debt and the sun will shine brighter here.

Beginning Wednesday I am getting up every day, working my job, saving my money, hiring a smart tax lawyer to keep me from paying anything and waiting for the GOP to solve the problem.

Oh, and that lovely crowing about taking back "your" country is putting me in a very happy mood.

Actually I have to agree with the liberals. Obama lost the election because he did not promote the progressive agenda. Somehow he miscalcualted and forgot to eliminate the right to vote. That was about the only thing he did not touch. Although he was pushing the voter fraud as much as possible.

Please Pat, give me a warning....I haven't had my second pot of coffee this am and in my morning pass over the internet the first thing I get is vanden Heuvel...oh, my eyes! :)

All BSing aside she is clueless....and in the Wall Street Journal Best of the Web they refer to the diminutive Keynesian writer from the NY Times as "former Enron adviser Paul Krugman". The only real experience he has in the private sector is Enron...need we say more.

Have a great weekend.

What is it about the liberals that they project what their party is doing to the nation upon the conservatives? And sadder still, the other liberals believes it.

This has been the case since I can remember as a young teenager. I remember liberal teachers warning us that he EEEEVILLLL conservatives were going to take away our rights, they were going to control our thoughts and the words that came out of our mouths, they would want us to all line up and commit suicide for the good of the world.

I read a lot of Kurt Vonnegut, Jr. and was fascinated about how he described how the future world would be like under the EEEVILLLL conservatives.

As it turns out, the liberals were projecting what they wanted to do, and are doing, to the world upon EEEVILLLL conservatives. They were actually warning me about themselves.

Proof of this happened this week, when liberals banned Happy Meals in San Francisco?

And liberals claim to be freedom loving Americans?

Then the liberals tax the ever living shit out the working class and tell the people they are being taxed by the conservatives.

Your take on the election is the the clearest and most accurate I have come across. Thanks