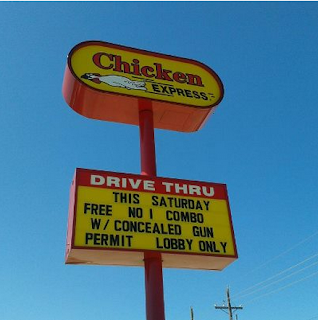 As the 2013 Louisiana legislature prepared to take up several gun regulation proposals, a local fast food fried chicken place has weighed into the debate by offered a free meal to concealed carry holders.

Chicken Express owner Randal Neel says it was the busiest Saturday he's ever had.  Via KSLA:

But it's not just about business. Neel says it's his way of taking a stand as a gun rights advocate, and making a statement as the Louisiana legislature considers more than a dozen bills that have been filed dealing with gun regulations. "It feels really good to be able to stand up for what you believe in."


Here is the proposed legislation the Louisiana legislature will be considering this session.  Most are geared toward protecting gun rights but a couple are not.  One bill would allow off-duty law enforcement to carry firearms in schools, another in bars; one concerns mental illness regulations, another covers the protection of concealed carry information.  Barbara Norton's bill would make it against the law to have an unsecured weapon in your home.  It always makes me nervous when they want to regulate what I do in my home.

KSLA has video of the free chicken day here.

Of course, a more paranoid person might wonder if DHS is lurking in the parking lot taking pictures of everyone...

I'm a shallow person, I see the sign and think 'um, fried chicken'.
Not so much in favor of concealed weapons in a bar by anyone, even off duty police officers. A restaurant that serves alcohol, fine.