Didn't we give up living off Ramen noodles in college? 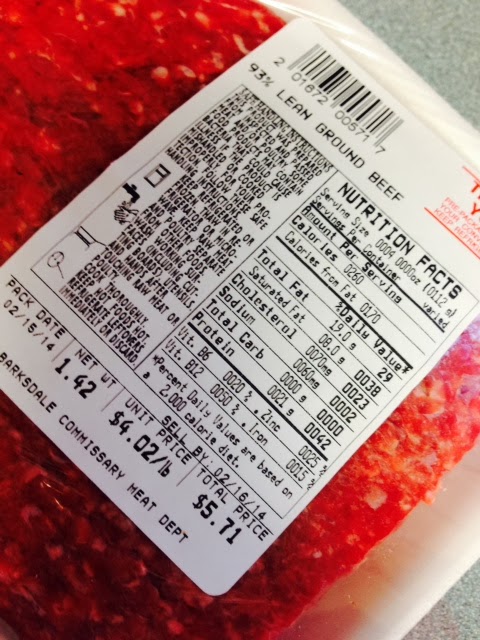 Over at Hot Air, Ed Morrissey has a post highlighting rising food prices.  This isn't news to anyone who has been in a grocery store lately, but it does seem relevant to point it out  on today, the fifth anniversary of the Porkulus bill.

If you’ve noticed a higher grocery bill in this era of supposedly low inflation, you’re not imagining things. Despite Washington estimates of low consumer inflation over the last few years, the prices of goods at the market are rising rapidly — especially for meat items, which have risen by double digits since 2011.


I've all but quit buying red meat, and not for health reasons or that I've become a vegetarian: I'm a red meat carnivore, but who in the world can afford a $24 rump roast for Sunday dinner?  Mr. SIGIS bought groceries at the commissary on base last week and paid $4.00 per lb. for ground beef.  A whole chicken runs about $6 now as opposed to about $4 a year ago at my grocery store.  Milk?  About $4.50 a gallon.  Our weekly splurge of ribeyes for the grill is a thing of the past.  Even my own favorite food group, beer, now costs about $2 more a six-pack.

Coincidentally, food stamp use is higher than its ever been, especially among our military.  Via CNN:


Food stamp redemption at military grocers has been rising steadily since the beginning of the recession in 2008. Nearly $104 million worth of food stamps was redeemed at military commissaries in the fiscal year ended Sept. 30.


This graphic tells the story: 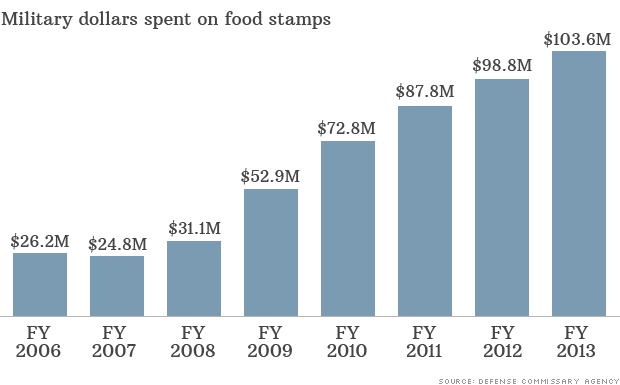 Meanwhile, Congress tried to cut military pensions and the Pentagon wants to close base commissaries.

Of course, Obama's gutting of welfare reform including making food stamps easier to obtain, so that could explain part of it; more Americans than ever are on food stamps,  but there's no question that food prices are rising.

That won’t change until two pressures on the economy are reversed: rising costs on business and improvement of chronic joblessness. The latter keeps wages depressed by providing a large labor pool for a relatively small number of net jobs created over the last five years since the beginning of the recovery in June 2009. On average since then, we have created significantly fewer jobs each month than necessary to keep pace with population growth. In large part, the job-creation market has been stifled by extra costs and disincentives to investors and businesses in job-creating expansion and risk-taking. Those same costs, along with relatively high energy costs, get passed along to consumers in higher prices, putting them in the economic vise described in this CBS report.Seems to me that the stimulus has failed and that Obama's policies have done more harm than good.

“If you recall five years ago, the notion was that if the government spent all this money — that, by the way, was borrowed— that somehow the economy would begin to grow and create jobs. Well, of course, it clearly failed,” Rubio says in the video, according to POLITICO’s Mike Allen in Playbook. “Five years later, underemployment is still too high, the number of people that have dropped out of the workforce is astounding, unemployment remains stubbornly high and our economy isn’t growing fast enough — proof that massive government spending, particularly debt spending, is not the solution to our economic growth problems.”


Maybe it's time to start living off the land again.

Here in Louisiana it's crawfish season!  (Oh, but they're $8 a pound right now.)
Posted by Pat Austin Becker at 1:44 PM

Just like the catastrophic droughts that coincidentally followed the stock market crash of 1929, so once again Texas and Oklahoma have suffered from another one of our periodic multi-year droughts immediately following the worldwide financial collapse. This has contributed to the high price of food, loss of jobs and nearly broken many local economies. If God had not been gracious enough to finally send us another oil boom and an amazing Governor to lead us through this, we'd be in a world of hurt. Here's one story from a year ago that will break your heart: http://www.nytimes.com/2013/02/28/us/drought-fells-a-texas-towns-biggest-employer.html?_r=0 , and here is one from last month with the current situation: http://www.foxnews.com/us/2014/01/04/texas-ranchers-hit-hard-by-drought-eye-rebuilding/

Now more than ever we have to be crafty shoppers. I watch the local ads and when something is on sale I buy a bunch. When the store I work in has ground beef on sale for $1.98 per lb I buy 20 or 30 lbs and vacuum seal it in one lb packages. They also just had rib eyes for $4.97 per lb so I vacuumed up a bunch. We do have very, very good meat at the store.

My favorite though (this might bring tears to your eyes) is when the almost out of date bacon is thrown in the mark down bin. Can you say 79 cents per lb?? Some weeks I grab 4 or 5 lbs that way. It's all perfectly fine to eat and is not compromised in any way.

I couldn't hardly live without my vacuum sealer. Meat and fish is good for 3 years once it's vacuumed. Oh course, it never lasts that long ;-)

Almost everything else comes from Costco.