Update on Residential Drag Races: Only one response from my pleas to city officials 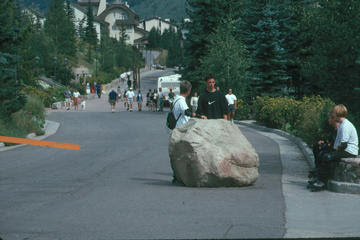 The only person who has bothered to respond is Matthew Linn - a courtesy for which I'm very grateful.

From the others?  Crickets.  Nothing.  Not an email, not a letter, not even a phone call.

Meanwhile, the drag races along my residential street continue.

So I've started doing some research because I think if you're going to gripe about a problem then you should at least be able to offer a solution.

There is something called Traffic Calming which works quite well in cities both in the U.S. and Europe.

Some of the genius of Dutch and other European methods is not the use of signage and enforcement to slow traffic, but literally a different road design, and that includes putting s#! in the way.


It is, in essence what my friend across the street was doing when she placed the huge green city garbage can in the middle of the road.  And truthfully, that's the only thing that has worked so far.

In addition to excessive speeds, we also have a huge volume of traffic as this street is used as a cut through to avoid traffic on two major arteries nearby.  I've been counting cars through the day - taking five-minute interval counts every half hour to get an average of about 1800 cars a day.  This is about the same number of cars that Ockley gets, just off of Kings Highway.  Ockley is wide and zoned for 35 mph, with painted center lines. There are four lanes which in practice is two wide driving lanes and a parking lane on each side.

In contrast, our street is zoned for 25 mph, is a narrow two lane blacktop with no center line and has numerous residents who park their cars in the road.  (I can't even tell you how many of these have been hit.)    So, the volume of traffic is a problem.

In addition to the 1800 cars, trucks, and SUVs that zoom through here, we also have 18-wheeler trucks come through to make deliveries to the business areas that border our once quiet neighborhood.  There is no way an 18-wheeler should be zooming down this street, yet there is no signage that says not to, so what's to stop them?  There also seems to be a large number of lawn service companies with trailers full of equipment that have no qualms about swerving around parked cars dragging their loads behind them.

Yesterday we came VERY close to seeing a collision between a UPS truck and a sky blue BMW.

So, given all this, and the lack of support from city officials, (with the exception of Mr. Linn- God bless him), perhaps my neighbors and I need to get more vocal about our problem.  Perhaps we need to appear at City Council meetings and engage the media to make ourselves heard.  Perhaps my neighbor needs to continue putting things in the road to forcibly slow the traffic down and maybe some tree limbs need to "fall" into the street.  Some natural speed bumps. 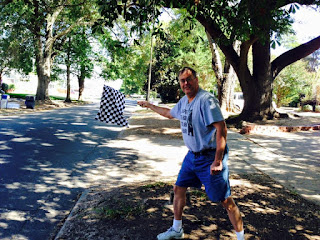 race" and can slow down.

(As I write this a taxi cab just flew down the street at 55 mph).

As I've been talking to people about this problem, I've learned that it's a city-wide problem.  Do they even write tickets anymore?  Why are drivers in such a hurry?  Slow down!  Life is passing you by fast enough -- at least slow down and enjoy the view.  Quit zooming down my street while texting.  Watch out for children and animals.

To help us out, I suggest that the city post officers here at random times to run radar.  Rumble strips might help, and speed tables would help.  In some areas, roundabouts help, but I don't think that's viable for my street.

Until the city gets on board to help us, there may just be some civil disobedience going on.  Nothing harmful, mind you.  No spikes in the road or anything like that.  But maybe a big green trash can.

Your title is a slur in drag racing. A drag race is a race between 2 race cars on private property.