The 1940s Radio Hour is a Hit at Shreveport Little Theater


It's been a long time since I've been to The Shreveport Little Theater but we went out today to see Seva May's production of The 1940s Radio Hour which we enjoyed immensely.

Who doesn't love the music of that era: this production was right up my alley!

The story is set during a December broadcast of a live radio cavalcade show from the Astor Hotel in New York City in 1942.  The first fifteen minutes or so are intentionally chaotic as the various characters dash in, brushing snow from coats, studying scripts, making phone calls, and getting ready for the show.  There is a certain degree of audience participation as you are expected to applaud when the "Applause" sign lights up -- this is live radio after all!

The cast for this production is a likable, talented mix of veterans and rookies which was perfect for this story because that's what you probably actually had in such performances.  It looked like the cast was having a great time with each other on stage and it all worked very well, I thought.

Luke Digilormo played B.J., a preppy sort of argyle sweater kind of fellow who nearly stole the show when they sang "Boogie Woogie Bugle Boy."  The sassy Geneva Lee Brown backed out of the song (she hadn't rehearsed it) and so the hapless B.J. was pulled up to the mike by the other girls in the act. Digilormo's expressive face and tall, thin frame were a natural for the song and dance number.  It was 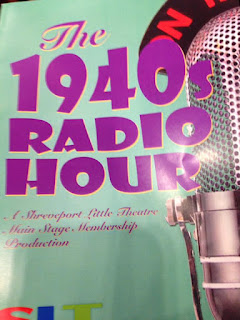 a real hit with the audience.

Jennifer Jackson played Ann Collier, who sang "That Old Black Magic" and nailed the 1940s look.  She has a lovely voice. Madeline Collier played Connie Miller who was absolutely adorable in her duet with B.J. singing "How About You,"  and you'll have to see her "ad" for Eskimo Pies for yourself.  Barbara Holmes played Geneva Lee Brown, and she was stunning singing "At Last" in a chill-bumps-inducing rendition of the Etta James classic.  She was quite glamorous with her diamonds and her satin dress!

Absolutely precious was young Zoie Swint who played Wanda the delivery girl who just wants a chance in front of the mike.  In her saddle oxfords and bobby socks, Wanda twirls her hair and closes her eyes as she listens to the other, more experienced singers, just waiting for her chance.

Bree Guggenhein played the part of Ginger, a sultry, sexy songstress who has the men all in a tither as she sings "Blues in the Night," shedding her red satin gloves as she goes.

Rick Stovall was a wonderful Johnny Cantone, the boozing, name dropping crooner who plans on leaving the show after the performance for hopefully greener pastures, much to the shock of his fellow cast members.

This production was the SLT debut of Casey Allen who played the part of Biff Baker, a saxophone player who is headed off to be a fighter pilot.  Allen has a little of a Matthew McConaughey look to him, and has a very poignant scene at the end, when the "show" is over and he's taking his leave.  He's a charismatic young actor who fit his part comfortably.

The show is filled with hits you remember from the era and in between songs there are the obligatory radio ads and jingles for refrigerators, scented soap, and laxatives. One of the girls is sipping a Coca-Cola while singing a Pepsi commercial. By the time the entire cast is spread across the stage singing "Strike Up the Band," you simply don't want the show to end.

Overall, the show was simply filled with great cast members who fully embodied the characters they were playing while still putting their own style and spin on each one.  The Bill Causey band was an excellent choice for this production and I loved seeing my good friend Bill Allen on stage with his stand up bass!

Shreveport Little Theater is to be commended for a fun, outstanding production and regular theater patrons will hopefully excuse my ignorance of the original and previous productions of this show; theater reviews aren't my specialty but we enjoyed the show so much I simply hope to encourage you to go.

The show is running through November 15 and if you hurry you can probably still get tickets.  It might even get you into the Christmas spirit a little bit as the cast sings Jingle Bells and Pops places a little Christmas gift under his tree.

We look forward to returning to SLT for a few of their upcoming shows.  I have my eye on "Hot n Cole - A Cole Porter Celebration" coming up in February/March.

Thanks for the great review. Come back soon! Nice observations--and spot on!
Robert Darrow, SLT