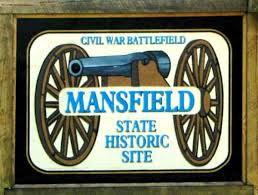 If your vacation plans this summer include staying around the Shreveport/Bossier area, keep in mind that despite the budget cuts throughout the state, the Mansfield Battle Park and Museum is still open, despite rumors to the contrary.

I checked with Park Manager Scott Dearman who tells me that they are open Wednesday - Sunday, 9:00-5:00 and that they don't expect to be shut down.

In fact, tomorrow, July 2, you can go and enjoy a hands-on program on Civil War era baseball beginning at 11:00 a.m.  Baseball was one of the many games the soldiers would play to break up the monotony of daily life:


A park ranger will begin with a brief talk on the evolution of the 19th-century game known as Town Ball. After this, what better way to learn about the soon-to-be “National Pastime” than to play the game? The rules will be explained to all participants and equipment will be provided to play a 2-3 inning game. So bring your family and friends and a picnic lunch and enjoy a game of baseball! And just a hint, there are no strike outs!

Here is an interesting article about baseball during the time of the Civil War by Michael Aubrecht:

During the War Between the States, countless baseball games, originally known as "townball", were organized in Army Camps and prisons on both sides of the Mason Dixon Line. Very little documentation exists on these games and most information has been derived from letters written by both officers and enlisted men to their families on the home front. For the hundreds of pictures taken during the Civil War by photography pioneer Matthew Brady, there is only one photo in the National Archives that clearly captured a baseball game underway in the background. Several newspaper artists also depicted primitive ballgames and other forms of recreation devised to help boost troop morale and maintain physical fitness. Regardless of the lack of "media coverage", military historians have proved that baseball was a common ground in a country divided, and helped both Union and Confederate soldiers temporarily escape the horror of war.

And here is another article from the Smithsonian about the earliest baseball game: 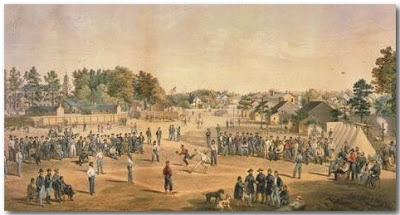 Though various forms of baseball were played in England and America for over a century prior to the Civil War, modern rules of the game were not developed and employed until the 1850s. The evolving Knickerbocker Code or rules had its origins in metropolitan New York in 1845. Union soldiers, more familiar with the game, introduced others, including Southerners and Westerners to baseball throughout the Civil War, resulting in thousands of soldiers learning the game. Upon returning home, the game spread to friends and neighbors and soon the sport was played in every region of the country, solidifying its title as “The National Pastime."

If you want to learn more, and play a game yourself, head to Mansfield. You can bring chairs, a grill, and a cooler and spend the day at a fascinating historic site!

Here is an overview of the Mansfield State Historic Site, including directions on how to get there.

This would be a great time to support the site and the museum and we are extremely lucky that they are still open given the near constant threats of closure by the governor.