Take a Trip to the Books Along the Teche Literary Festival: Part 1 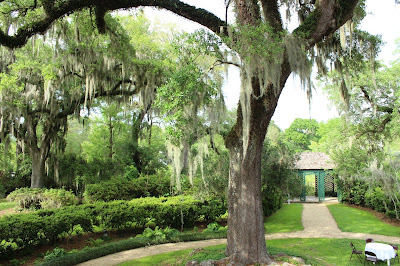 There is something magical about New Iberia, Louisiana.  Maybe it is the 135-mile, chocolate brown Bayou Teche whose history is filled with mystery and adventure.  Maybe it is the spreading live oaks dripping with Spanish moss that gently sways in the breeze, lulling you into utter contentment and bliss.  Or maybe it is laughter of the people who all seem to have a light in their eyes and a smile on their face.

Perhaps it is a combination of all that and more.

After attending the third annual Books Along the Teche Literary Festival, I think I know where my retirement plans lie.

But, let me start at the beginning.

Steve and I arrived Thursday afternoon in New Iberia with the intent of doing a bit of exploring on our own before the festival kicked off on Friday.  After checking into the hotel, our first stop was the Visitor's Center at Shadows on the Teche to pick up our media passes for the weekend.  While there, we were able to tag along on the last tour of the day of the beautiful plantation home of Weeks Hall.  We were able to go through the house with a guide and then walk the beautiful gardens.

The house, like many homes of that style and period, has no interior staircase; to get from the lower floor to the upper you must use one of two outside staircases.  The rooms are immaculately restored right down to the carpet pattern in the parlor upstairs.

The gardens are lush and manicured with stunning live oaks draped with silvery green Spanish moss that sways in the bayou breeze.  On this evening, the Cycle Zydeco group was in town and the cyclists were spread out across the back lawn at white draped tables enjoying drinks and food along the banks of Bayou Teche as the day drew to a close.

We headed toward the car after stopping by the graves of Weeks Hall and his family in the garden.  There is so much fascinating history about this house and its owners.  Now in the hands of the National Trust, the Weeks family built the home in the 1830s as a residence on their plantation.  The home was occupied by Union forces during the American Civil War and by the time Weeks Hall acquired sole ownership and returned to the home in the early 1900s it was in some disrepair.  He dedicated the rest of his life to restoring the home and gardens.

Read more about the home and its family here; I'd also suggest Morris Raphael's biography of Weeks Hall.

We had eaten a late lunch on the road at Prejeans in Lafayette so we didn't start getting hungry until late evening.  We walked the historic district in New Iberia and dipped into Books Along the Teche bookstore: a blissfully independent bookshop that has been in operation for decades. Howard Kingston and his wife Lorraine are as friendly as anyone could ever be.  Howard is the guy you need to see if you want a signed James Lee Burke book.  He's got them.  And he has signed first editions!

We visited with them in the shop for a bit; the beautiful Lorraine signed us up to their mailing list, and we headed over to Bojangles to eat some delicious raw oysters.

Did I tell you there was something magical about New Iberia?  Steve found a pearl in his oyster!

The streets were crowded with the cyclists and then the patrons of the literary festival (like us) began to arrive so it wasn't long before all the sidewalks, restaurants, and shops were standing room only.  After polishing off our oysters we went to Boulingy Plaza to listen to the live music.

I'd already decided I was in love with New Iberia back at The Shadows.  By the time I listened to one or two songs by Chubby Carrier and the Bayou Swamp Band as they played cajun and zydeco tunes in the Steamboat Pavillion next to Bayou Teche, by the time I'd watched the dancers spin and twirl around the floor, by the time the sun started to glow pink in the western sky, I was texting my friends back home telling them I'd found heaven.

And that was before Jo-El Sonnier came on stage.

Wait, what?!  That little something magic about New Iberia.  I was just taking photos and watching the guy on stage play the washboard when next thing you know, Jo-El Sonnier is up there making magic happen with that accordion.  I lost my mind!

Even better, he hung around after his song and took pictures with us!  Get out!

We would have stayed all night after that, but Friday beckoned and we knew we had to get some sleep for the busy weekend ahead.  The party was still going strong when we left and made our way back to the hotel.

Friday morning we had breakfast at the famous Victor's Cafeteria, Dave Robicheaux's favorite place to eat.  Victor's serves cafeteria style; go through the line, place your order, and they'll bring it to your table.  We had standard breakfast fare and it was delicious.  You can always tell a great breakfast place if they know how to cook your grits, and Victor's does.

Our first stop after breakfast was the Tastes Along the Teche cooking demo with my chef-idol Marcelle Bienvenu who made crawfish etouffee, chef Alex Patout who made gumbo, and then from Tabasco, chef Lionel Robin who made a delicious, garlic shrimp pasta dish.  We got to sample all of it which pretty much killed me for lunch!

But that magic thing?  Marcelle Bienvenu.  Oh my lord.  I have entire binders filled with her recipes clipped from The Shreveport Times years ago.  My mother and I loved reading Marcelle's columns, and I can say Marcelle because you felt like she was your best friend after reading those columns.  She wrote about her husband Rock and their life on the bayou.  Rock would bring home oysters and she'd have to whip up some delicious dish and invite everyone in the neighborhood over to eat them.  I still use her recipes and I kept the columns as much for the stories as I did the recipes.

When I saw her standing in the back of the crowd watching the other chefs, I had to go up and speak to her and tell her how much I loved her work.  I'm not usually so forward, but I'm glad I did it. She could not have been nicer!  We even talked about my book coming out in October and she knew about Melrose and was interested in Cammie Henry!  She even gave me her card and asked me to let her know when it is released!

Get out!  Marcelle Bienvenu wants to read my book! It's too much!  Steve took a picture of us and I'm framing it.  Love!

So, I was not up for lunch after feasting on all of this delicious cajun fare and so while others went to lunch at Victor's, Steve and I went to the Bayou Teche museum.

What a lovely museum!  Every exhibit was so incredibly done and so informative that we could have stayed for hours.  The bayou is a huge part of their history of course, but did you know about the salt mining?  And the many Civil War battles along the bayou?  The artifacts preserved in this museum are stunning.  You can even go down into a salt mine!  Or underwater to view the artifacts from a shipwreck!

But even better?  Did you know that artist George Rodrigue was from New Iberia?  I have always loved his Blue Dog paintings and was broken hearted when Rodrigue died in 2013.  According to the volunteer at the museum, when he died, his studio was boxed up and shipped to the museum -- right down to the plywood on his floor.  This studio has been carefully recreated just as it was when he died.

The painting he was working on when he died is on the easel.

I'd be lying if I didn't tell you I got misty eyed.  It was overwhelming.

You see that Coca-Cola cooler?  It's filled with his paint tubes.  Note his glasses sitting on the tray.

The museum is expanding its space and will enlarge the Rodrigue exhibit; it's scale is somewhat condensed right now.  But they've even got that plywood down on the floor just the way it actually was.  It's amazing.

We had to leave the museum before we were really ready in order to catch the Dave's Haunts and Jaunts Tour bus.  Steve and I walked down Main back toward Victor's and Cathy Indest, one of the festival organizers, chased us down on the street to ask if we were with the festival, if we were having fun, and to see if we needed anything.  That's some serious hospitality!

We visited with her on the street for a while and then Howard Kingston from the bookshop came up and visited.  Howard gives the Dave Robicheaux talk every year and tells festival goers about James Lee Burke and his time in New Iberia.  Howard knows that history better than anyone and his talk is always filled with interesting information.  Everyone gathers inside Victor's, has lunch and some towering slice of pie, and then after the talk we all get on the tour bus.


Oh, this tour!  Nothing but fun and laughter!

The bus was full and we all got Mardi Gras beads as we climbed aboard.  Our guide was Danny Bonaventure of Allons A Lafayette Tours and he is a kick!  As we drove through Iberia Parish, he pointed out all the interesting sites we read about in James Lee Burke's books: where Dave Robicheaux eats, works, the hospital where he took Alafair after a plane crash, the house he lived in on Bayou Teche (you can buy it for $400,000 right now!), the cemetery Dave sees from his office window, and of course, Clete Purcell's room at the Teche Motel.  All the while Bonaventure is reading passages from the books and peppering them with his own wit and humor.

One of the last stops was the Teche Motel.

At the Teche Motel we got to go inside unit number four where Clete Purcell stays when he's in town (in the novels).

The motor court is precious and Bonaventure told us you can stay there for $30 a night!  When one of the ladies on the bus pointed out that the proprietor told her $45, Bonaventure laughed and said, "He went up to $45!  He told you that?  He saw 'tourist' written on your hat!"

The motel backs up to the bayou and has a lovely recreation area with tables, grills, hammocks, and swings as well as a deck for fishing.


The tour took most of the afternoon and by the time it was done, we had to head back to the hotel to get ready for the big opening party at Shadows on the Teche.

I'm going to save that, and Saturday, and Sunday, for the next installment!

You'll have to come back tomorrow for that.  It gets better and better!  Ernest Gaines!  The ULL symposium!  Avery Island!

For now, I'll leave you under the oaks to watch the moss sway. 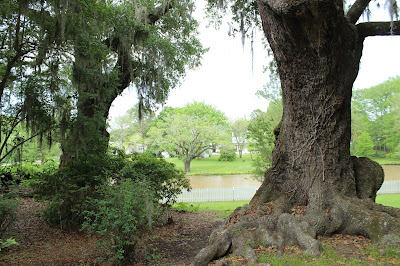