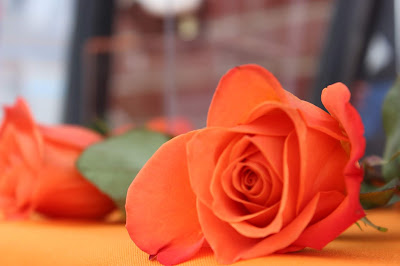 Last week I was scrolling through Facebook when Braveheart's page popped up on my feed. "This is a post I hoped I would never have to write."  My heart sank. A fear-adrenaline rush. I knew without reading any further what I was about to see.  Brave is gone.  All I could think was "No!"  Wednesday, January 23, 2019. 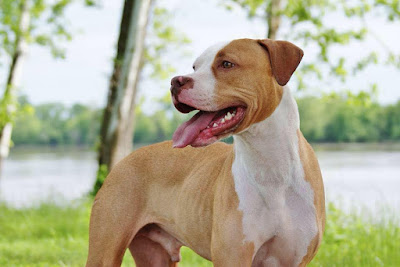 In 2013, we all fell in love with a dog.  Some 24,000 of us, judging by Brave's Facebook page.  But this was never, ever "just a dog."  You all know Brave's story; he was discovered near death in a storage facility in the sweltering Louisiana summer heat in 2013. His abuser went to trial in 2015.  My blog post about the trial received more hits than anything I ever posted.  It was also one of the longest posts I ever ran and I typed it straight through as soon as I got home from the trial, after the verdict.

By Monday Loraine reaches out to me: "Can you call me?"  Of course. "Bo wants you to write an obituary for Brave."  My heart sank. There was never any question that I would do it, but the thought of all the tears I would shed as I did was daunting.  "He's going to owe me. At least a six-pack." No problem."

There are people I have known that I did not cry over as much as I have this dog.  #truth 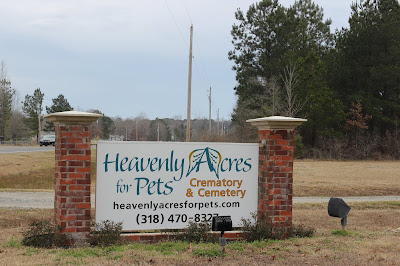 Heavenly Acres Pet Cemetery near Elm Grove is a really pretty spot situated on the two-lane blacktop among the hardwoods.  Jaci and Kenneth are doing God's work there and seem perfectly suited to it. They are gracious and kind people. Jaci looks you in the eye when she talks to you and puts you immediately at ease. In black pants and navy top today, long hair flowing down her back, she welcomed guests with a bright smile as soon as they arrived while Kenneth directed parking for the large crowd.  There is a semi-covered pavilion area with wicker seating and benches. Vines are trailing up the wooden posts and eventually will form a cover over the arbor type covering.

A long table is covered with an orange cloth. Orange is the color animal lovers wear to protest cruelty to animals. During the trial lots of us wore orange because we weren't allowed to wear our Team Braveheart shirts.  On this table today there was a jar of dog treats, color photographs of Braveheart both alone and with his friends. A guest register. A program. A plexiglass stand with a carved rosewood box.  Braveheart. 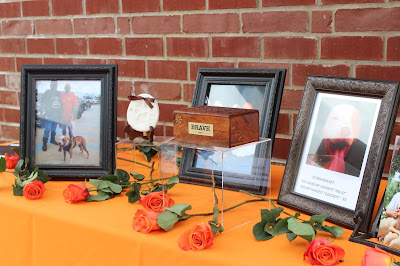 A guest is spreading orange roses on the table.  "Please take one when the service is over," she said.  "I wish I had bought more. This is all they had." Jaci helps arrange them.  They are lovely.

Justin Thomas with Lumberjack Rescue is there with Clarence.  It might be hard to find a more sentimental dog lover than Justin. I think he's a hero; rescue is such demanding work and Justin has a big job in Springhill where abandoned animals seem to be so prevalent. Justin rails on his Facebook page about animal cruelty and wears his frustrations on his sleeve but this is why we love him. He says what we all feel and his heart is bigger than anyone I know.  Clarence is as happy a dog as you can imagine and he loves his human unconditionally.  That's obvious. 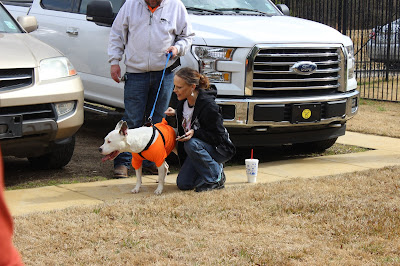 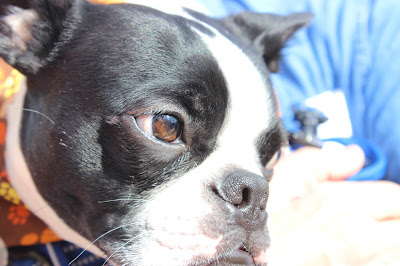 I see Anita and have to go introduce myself.  I'm hoping she will start a Cat Daddy Bilbo Facebook page.  I'm a fan.  Bilbo is her precious rescue cat that has more than his fair share of personality.

Everyone mingles before the service. Lots of old friend here. 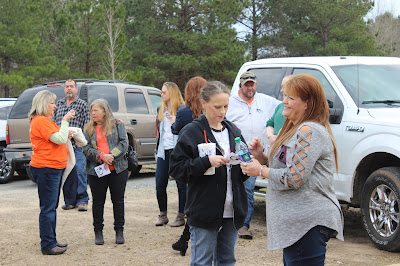 Bo, Ronda, and Raine finally come through the gate about 1:10.  Raine is driving.  A parking spot had been reserved for them up front.  A swell of people move toward them and Bo and Ronda are wrapped in embraces as soon as they get out of the car. 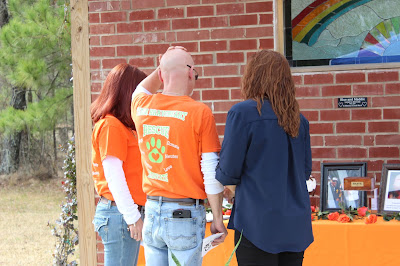 *******************
Ronda looks beautiful, as always. Serene.  You know she's hurting; it's in her eyes. Maybe it's her work experience that helps a bit, even though this one is oh so personal. She's in jeans and the orange Team Braveheart t-shirt, as so many of us are. Bo is as well. The grief shows on Bo. Straight up pain. Raw.

Bo and Ronda sit next to Ronda's mother on a wicker loveseat while Raine takes a chair next to them. Jaci begins, "When Jean called me last week and told me she had a big one for me, I thought she meant a hundred pound dog. When she told me who it was I couldn't believe it." 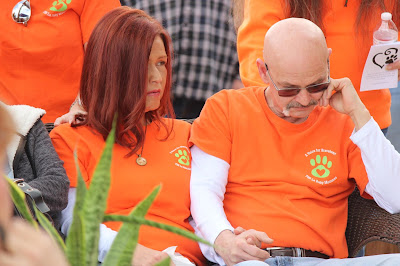 *********************
Guests were invited to speak and share memories. Justin, brave soul, went first. Voice trembling, he read his comments, a poem, and then closed with "Thank you Brave for what you taught us, and thank you Bo and Ronda for sharing him with us."  When he finished, both Bo and Ronda stood to embrace him. 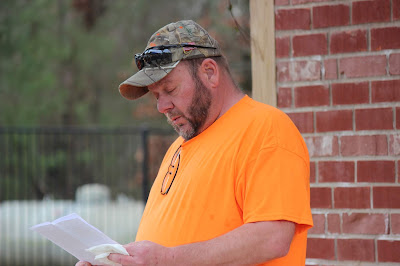 Raine spoke after Justin. I knew how hard she was struggling with her emotions and how hard she was trying to keep her voice steady. I was literally willing her to get through it. "If there is one thing I wish people would take away from here today it is that we should all be kinder. We should all stop the anger and bitterness. We should all just Be Brave," she said. No truer words.  This speech, too, was followed with a poignant embrace. 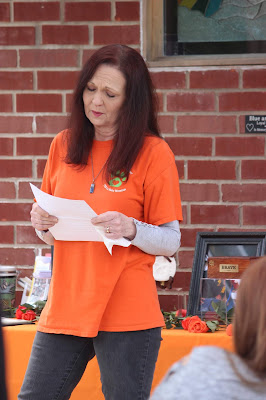 Throughout the service, Bo clutched a chrome decorative object in his hand. I looked at it afterward; it spelled out BRAVE. 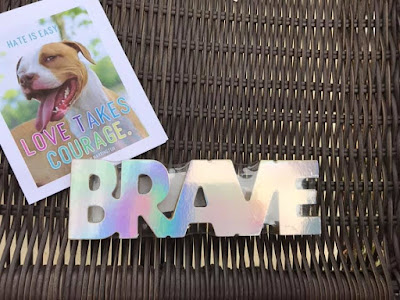 Cynthia, thank goodness, broke through some of the sadness with a heartfelt message about the power of social media to do good, and how everyone rose up to fight for Brave. Her speech lifted Bo, ignited a spark in him, and when she finished he got up to speak. "I wasn't going to say anything," he said, "but you sparked something in me and I want to speak."  He had us all laughing before he was finished.  I'm not sure how he did that, but we laughed. 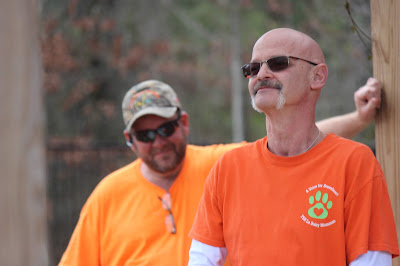 It's such a cliche, but it started to rain, just a little. Like the sky was crying for Brave. Umbrellas came out, hoods came up, people moved around a little.  Then the sun came back; I just had to smile. I thought, perfect.  Just perfect.

As the final song played, a tearjerker song that I can't remember the name of, Bo's head dropped, his whole body sagged, and Ronda's protective arm went around him. He stood up, walked to the table and picked up his dog.  He picked up that rosewood box with the brass plaque, "Brave," on it, clutched it to him, and his whole body curled around it as he sat back down.  The dam broke and my tears flowed.  It was the saddest thing I ever saw in my life.  Ever. 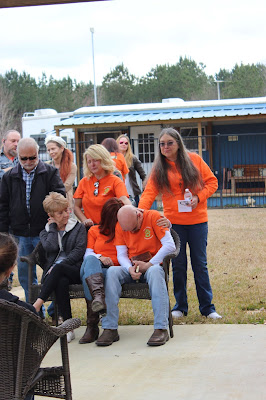 Balloon release. Biodegradable balloons. No strings. Three huge black bags filled with orange balloons. Some levity now. Some hugs and laughter as we all get a balloon.  One escapes early and drifts into the sky. I think that was was Brave's, going ahead of us. 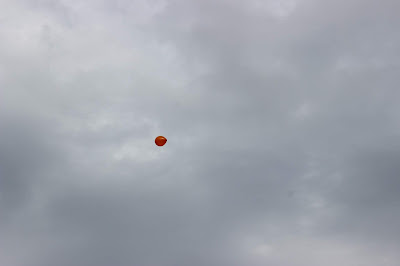 Everyone holds their balloons aloft. Kelly Clarkson's "Stronger" blasts from the pavilion and on the count we release.  Everyone's eyes follow the balloons until we can't see them any longer. 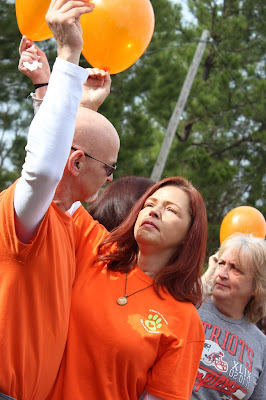 I brought home an orange rose. I left behind a flood of tears. I took a lot of pictures. I hugged some people. I pet some dogs. I lost a friend.  So did we all.  Braveheart had a smile that I will never forget; I didn't spend as much time with Brave as a lot of people did.  I was the "Braveheart Blogger" because of my trial piece, but Brave let me love him. He let Steve walk him into the Barkus and Meoux parade a couple of years ago when we ran into him in the parking lot. He gave us kisses and he taught us about unconditional love, hope, and trust. He made all of us better human beings. 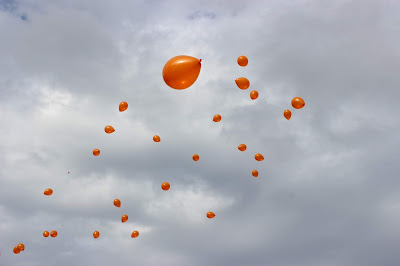 Run free, sweet Braveheart.  You were truly a champion.  No dog ever had a bigger heart or taught us so much. 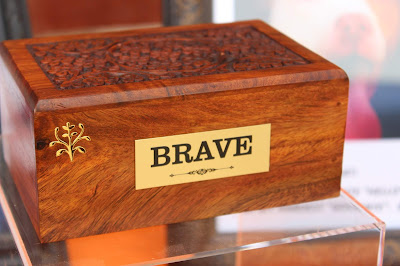 This is a really great piece. I didn't know anything about the Brave east story but I cried reading this feeling your emotion. I feel the same about Kane who is approaching 15 a parvo survivor and absolutely the most loyal and best friend I have ever had

Dogs have a way of bringing people together at their best. I have many people that come by to see Kane not me. They bring him food treats toys medicine and love. Kane even won my mother's heart.....you would have to know Mom to appreciate that accomplishment
I was unfamiliar with Bravehearts story. Now I feel I know him. Thanks Pat