Added: Services tentatively scheduled for January 8 at 1:00, St. Joseph's Catholic Church. Please spread the word with anyone who knew Stuart and please feel free to comment or consider this post as a guestbook to share with the /family.

One of the funniest, most fun-loving people I've ever known left us yesterday, on Christmas Eve.

Stuart Shannon was a friend of mine for almost thirty years. If you ever went to T.S. Station on Shreveport-Barksdale Highway, you probably knew Stuart. He was the manager of the place for many years.  He would have been the tall, fit guy in slacks and a tie with the big mustache, with the brisk, purposeful walk.

Stuart was born in Melbourne, Arkansas on November 5, 1952.  His parents, Josephia and Karr Shannon moved to Shreveport and Stuart attended Catholic schools, eventually going to LSU and to Centenary to obtain his MBA. He had one brother, Karr Shannon III, who lives in Coral Gables, Florida.

Stuart was the life of any party or gathering with his dry wit and infectious laugh.

Everyone loved being around Stuart. He could debate with you on almost any subject and his knowledge of sports trivia was unbeatable. We always made crazy bets: we'd bet on the Masters golf tournament, the over-under on a football game, the outcome of a prize fight and how many rounds it might go. And let me tell you, Stuart would never let you out of a bet if you lost. Never. One of my daughter's teenage friends made a bet with Stuart and lost, and Stuart made him pay up: he considered it a life lesson for the young man. "When he's a grown man," Stuart said, "and tries to get out of a bet, he could get really hurt!" It wasn't that much money. It was the principle of the thing. He might have seemed gruff sometimes, but he had a heart of gold.

We used to have "deck nights" on Friday and Saturday nights; friends and friends of friends would
wander to our backyard where the twinkly lights were always on and the music playing from the CD player on the deck. Stuart would walk in wearing his "chili pepper pants" and the party would come alive. Our neighbors had a game room with a pool table and since we have a joined driveway it was easy to move back and forth between our houses. Stuart was a sharp pool player and tough on the ping pong table, too.  He'd tuck his tie in his shirt so it wouldn't get in his way and proceed to decimate his opponent.

Mardi Gras was one of his favorite weekends and the home where he lived with his mother on River Road backed up to the bayou. We would park at Stuart's, he'd mix a tall drink in a plastic cup, and we'd all go walking the parade route. Walking would be slow going because he knew so many people that he had to stop and talk every few yards.

I worked for Stuart for a year or so at T.S. Station; he let me come wait tables there and he never cut me one bit of slack because of our friendship. He expected me to show up for my shift just like anyone else. One time I had fever and tried to get out of work; he checked my forehead, told me I didn't have a high enough fever, and sent me out on the floor. I was mad about that for a long time, but I got over it. Everyone that worked for Stuart respected him as far as I ever knew. In the restaurant business where turnover is usually high, people generally stayed with Stu.

Stuart was a great cook; I remember him going to the restaurant in the middle of the night just to get the prime rib going. He loved to read, and he was a great golfer. Stuart was fearless; he was always up for anything.

I can still hear his laugh; Stuart had the most infectious laugh I've ever heard. To me, that is what I will always remember about him; that and those crazy chili pepper pants. And his friendship. If he was your friend, he was your friend for life.

We lost touch in recent years in that we just didn't get to talk or visit as often, but I always knew he was there. Stuart was one of those people that if you were in a bind and had just one phone call, you'd call Stu. He'd be there for you.

At this writing, I don't know what sort of funeral arrangements there are for Stuart but as I hear of anything I will update this post.

He was a good friend and I will miss him.

Added:  Since I wrote this I keep thinking of stories. For example, one night, one of those deck nights, we were all outside on the deck, music blaring, conversations among small groups, and I guess about fifteen or sixteen people were here. We kept wondering when Stu would show up, but we never saw him.

The party started to wind down and a few of us went inside to turn on the television. At the time, we had a huge television in the bedroom which was right off the deck, so it was a natural landing space on those nights, for people to hang out in there and watch tv.

During a lull in the conversation we kept hearing snoring.  It was the strangest thing. Eventually someone looked under the bed and there was Stuart, fast asleep.

Maybe you had to be there, but man, we thought that was hilarious. It became part of the "Do you remember the time..." repertoire for a long time!

Added:  Thanks to Timmy Mitchell for sharing this great photo with me!  What a great group of guys. 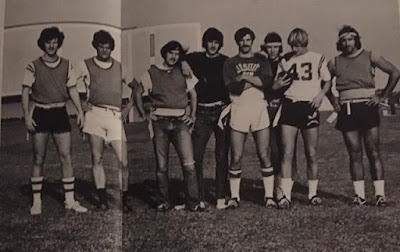 Email ThisBlogThis!Share to TwitterShare to FacebookShare to Pinterest
Labels: obits

I am so sorry to see this about Stuart. I grew up with Stuart and we remained good friends into our fifties when we too, lost touch. I last saw him in 2016 at my sister's funeral and he was in poor health. Our adventures were too numerous to talk about but one does come to mind after reading the one you posted Pat - we threw a surprise birthday party for Stuart and several of us made sure he knew to show up at the place where we were having the surprise party and SURPRISE!....Stuart never showed up!! I am left with lots of good memories of Stuart. He was a good friend through the years and I wish we could have stayed close. So sad. Rest In Peace My Friend