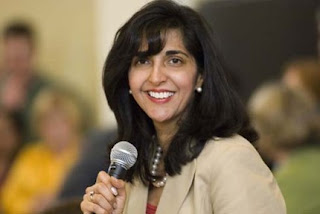 The Supriya Jindal Foundation for Louisiana’s Children seeks to aid Louisiana’s children in all aspects of education, with special emphasis on mathematics and the sciences, giving teachers new tools that will foster an innovative and enriching learning environment.  Initially, the foundation is providing interactive whiteboard technology to schools across Louisiana. Studies show that such technology gives students the opportunity to learn by combining visual representations, sounds, and the ability to interact with the whiteboard and their fellow students. With varying styles of learning, these interactive whiteboards allow teachers to cater to all of our students.

To date, the Foundation has installed the Promethean Boards in some 50 schools across the state.

If you buy into the NYTimes perspective, the primary reason companies such as Marathon Oil, Northrop Grumman, and Dow Chemical, among others, has given to the foundation is to encourage a favorable disposition from Governor Jindal on issues that benefit their individual companies.  Never mind that corporations regularly make it a practice to donate to charities.  Why not donate to a cause that would benefit the area in which you do business?

Of course, several pertinent pieces of information that provide context also get conveniently left out in this mini-Watergate saga. For one, the reason why these paragons of public integrity could find out if any donors had business with state government was because of, well … that fiend Bobby Jindal, who made the state put all that information online. And it’s very common for corporations to donate money because their bylaws have these “social responsibility” requirements that make them have to give away a certain portion of their revenues to charities, so why not in their own backyards where they have business? And if this all was so nefarious, being as the state gives out billions of dollars a year in state contracts (few that Jindal ever himself reviews personally), why aren’t those with similar, bigger, and far bigger amounts ponying up as well in response to Gov. Jindal’s virtual bite?

What is Mrs. Jindal's organization to do?  Refuse donations from anyone who does business in Louisiana?  That would rule out a lot of folks.


There has been full and open disclosure about the donations and there has been no proof offered by the Times, other than allegations, that the corporations who donated received any special favors.


It's the appearance of things that offends the Times:  "it creates the appearance he is being bribed," says Anne Rolfes, founding director of a Louisiana environmental group.  There is no evidence of this, or even evidence that Jindal is in anyway involved except for possibly the fact that he appears in a photo with his wife on the Foundation's donation page.

As "proof" of impropriety the Times offers AT&T who donated $250,000 because they wanted "to sell cable television services without having to negotiate with individual parishes."  Would Jindal have refused to sign off on that had the donation not been given?  No proof offered.

Marathon Oil's gift of $250,000 was supposedly to increase the amount of oil it can refine in Louisiana.  That's good for the economy and for Louisiana.  Don't we need that right now?  Would Jindal have refused approval without the donation?  Doubtful.

To the NYT, I say if you have proof that someone gained favor by donating to the Supriya Jindal Foundation, give it up.  If not, keep your insinuations and allegations in your back pocket until you can actually prove something.
Posted by Pat Austin Becker at 1:07 PM

It's the same old, same old.

Conservatives: must have some ulterior motive for doing good works.

The NYT sucks. It's literally not worth the trees it kills.