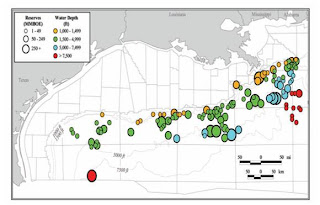 Apparently Obama would rather buy oil from foreign sources while he tilts at windmills and looks to the future of "green energy."


While Chevron is the fifth company permitted to resume work in the area following the last year’s Deepwater Horizon rig explosion, it’s the first to be allowed to tap a reservoir that has never produced, according to the regulator.

Thirty-nine shallow permits have been issued to date with 13 still pending.  Why the hold on shallow water permits when the BP spill was deepwater?  The Bureau of Energy Management, Regulation, and Enforcement has 8 permits pending for wells in depths greater than 500 feet.

We have vast oil reserves in the Gulf of Mexico, yet Obama would rather buy oil from Brazil or the Middle East.  Victor Davis Hanson calls this a "man made energy crisis," which is something akin to a "man made disaster," I'm afraid.

Consider the logic of the president’s Orwellian declaration: The United States in the last two years has restricted oil exploration of the sort Brazil is now rushing to embrace. We have run up more than $4 trillion in consecutive budget deficits during the Obama administration and are near federal insolvency. Therefore, the United States should be happy to borrow more money to purchase the sort of “new stable sources of energy” from Brazil’s offshore wells that we most certainly will not develop off our own coasts.

Does this make any sense at all?  It does if what you want to do is ruin the energy industry in America. In Brazil, Obama said:

“With the new oil finds off Brazil, President [Dilma] Rousseff has said that Brazil wants to be a major supplier of new stable sources of energy, and I’ve told her that the United States wants to be a major customer, which would be a win-win for both our countries.”

Just makes you want to slap your head, doesn't it?  It's not exactly a "win-win," buddy.  Why buy oil from Brazil when we have our own?  Of course, Brazil gets to drill in the Gulf of Mexico. Is Brazil going to drill for our oil and sell itback to us?  THAT makes a lot of sense.  Earlier this month Petrobras received permission to pull oil out of the Gulf, conveniently gaining approval right before Obama's Fabulous Brazilian Adventure.

It's not just oil.  How could we forget Obama's promise to bankrupt the coal industry?  To his credit, he didn't shut down the coal mining industry after the last mine disaster as he did with the oil industry and the BP spill.  Union pressure, maybe.

Cap and trade?  One shudders to think what that monstrosity would have done to energy prices.

Hanson makes the case that Obama's vision is to turn America into something European with high speed rail and high gas prices:

At a time of trillion-dollar deficits, the administration is borrowing billions to promote high-speed rail, and is heavily invested in the federally subsidized $42,000 Government Motors Chevy Volt. Apparently the common denominator here is a deductive view that high energy prices will force Americans to emulate European centrally planned and state-run transportation.

That would be the key term - "state run."  State run transportation, state run health care, even massive expansion of entitlement programs all fit into Obama's vision of America.

I've got new for you.  That's not my vision of America AT ALL.  What in the world is wrong with drilling our own oil and supporting the current energy industry in our country rather than bankrupting it?  Why not drill in the gulf and why not open ANWR?  What a naive puppet this man is.  How clueless.

You want to develop "green energy," fine.  But don't run us out on a limb and then saw it off with your solar powered chain saw.


(Graphic from EOEarth)
Posted by Pat Austin Becker at 4:18 PM

BO forgets who it is he is supposed to be working for!! Why permit Petrobras before Shell and Chevron??
And we are to help Brazil with our technical expertise. Good luck getting work permits for US citizens to go to Brazil - long and expensive process. I fear that as with Asia, our technology will be confiscated and we will be left holding an empty bag & gas can.