Is Governor Jindal the "Superman" Education Has Been Waiting For? 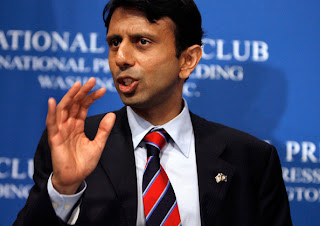 Last month Governor Bobby Jindal unveiled his plan for education reform in Louisiana.  Since then I've read nearly every thing I can get my hands on about the plan, both pro and con.  The discussion even motivated me to finally watch Waiting for Superman.  While I think all sides agree that something needs to be done, I still have more questions than answers about Jindal's plan.

Full disclosure:  I'm a 16 year educator in the Louisiana public school system.  I've been at my current school since 2001 and by the Letter Grade Policy instituted by our state in 2010, my school is ranked "low performing."  I've addressed the topic of letter grades for schools on this blog before and won't rehash that one, but to be sure, it's a much more complicated equation than the current grading system allows for.

That said, let me just reiterate that I still have more questions than answers about the current state of public education.  Consider the Superman documentary, for example.  The kids highlighted in that film all had a concerned, dedicated parent pushing them and pushing to get them into a charter school.  What about kids that don't have that?  What about kids that don't have someone pulling for them like that?

The film criticizes "the tracking system" and stresses the idea that every single kid go to college.  Is this truly realistic or just utopian and is one considered a "bad teacher" for suggesting that not all kids are in fact college material?  (I personally am not advocating one way or the other at this point so save your hate mail; I'm just posing questions here).

In Louisiana, one of the ideas Governor Jindal has put forth is to expand the voucher program that has been in place since 2003.

“First, our plan will expand the existing Scholarship Program statewide for low-income students at C, D and F schools."


Some educators have a problem with this citing a lack of slots in private schools as well as questions about the criteria for holding private and parochial schools accountable.


And what of the students who don't meet the academic requirements to get into these schools in the first place?   As noted in Waiting for Superman, most states have large numbers of children reading below grade level and performing poorly in math, too.  Will private and parochial schools have to take those students anyway or will they just be stuck in those failing schools?


Governor Jindal is also advocating creation of more charter schools, getting tougher on school discipline, and finding ways around that tenure rule:


Of course, there are still questions about how to best determine what an "effective" or "highly effective" teacher is.


Some teachers are in schools where students have had strong parental support and expectations at home their entire lives.  They've had a history of good schools behind them and when they get into high school they are on or near grade level.  But what of the teacher in the school where many children struggle daily just to survive, have little or no parental support, and reach high school having not been on grade level since second or third grade?  Is that high school teacher going to be "ineffective" if he or she can't get that student on grade level in one school year?


The Louisiana legislature doesn't go into session until March so as of now there is no actual legislation to study.  Most seem to think that Governor Jindal will get some of his measures passed but not all.  He will surely come under fire from both sides.


As I said, more questions than answers at this point.

Sorry. A liberal arts degree is not an entitlement, anymore than it is job training...although the guy in the white house obviously disagrees.

The solution to the crises in public education is not to punish teachers, or close down schools...it's to expel troublemakers and ensure that only the cream is directed toward college. The rest, who aren't in jail already, should be directed to tech schools for ACTUAL job training. There is no shame in being a plumber; they make more each year than I ever could!

To INCREASE the VALUE of a liberal arts education, these degrees should be far more uncommon than they are now. When everyone has a BA, it becomes simply a High School degree, part 2.

The thing to do with education is get the government out. That would help more than anything. Then get the union out, that would be perfect.

As to vouchers, my children went to Southfield. The people there did not want vouchers as that would mean control by the government and they wanted to maintain their rep as the best school in the city. I agree with them.

As to direction to college, leave the kids alone. I agree that many should not go to college and a plumber is a better occupation. But I graduated from Byrd in the sixties with a C-. I scored poorly in the SAT. I went to LSU as they took everyone and fluked out everybody in the first year. I made the Dean's list. I went to med. school in 3 years and graduated with honors. I have been one of the best physicians in LA. So much for high school grades and massive exams. Just leave the kids alone, they will seek their own level.

Last week I sent you and my other teacher friend the article “Liberals don’t home school your children” and his comments included how parents should raise their children, teach them manners and patience before they get to him. My retort was “and parents, as a cop don’t expect me to raise your children...”

This is the basic issue. There are inner city kids who are getting good education but the critical factor before a teacher sees them is a supportive family raising, encouraging, molding and discipling the child which is critical for the success of education (and life in general). That way they are ready for you.

The real decline of public education (among other things in our society) started in the late 60s with the Great Society and the resulting decay of minority (especially black) families in the inner cities. We have government saying “Girls have all the kids you want and don’t worry...” and “Boys, father all the kids you want and you don’t have any responsibility, we’ll take care of them...” This has led to generations of minority (and a growing number of white) young people whose only life is living for a relief check and they see no real reason to grow up or be responsible.

Until people start raising their children again education will have troubles. And unfortunately I will be very busy.