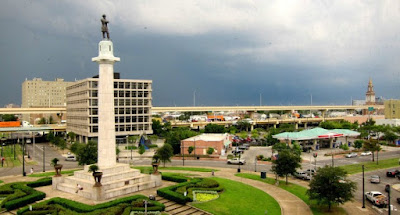 My ancestors on my mother’s side were originally from Castile, Spain; they settled in Natchez, Mississippi and then moved to Rapides Parish in central Louisiana where they were landowners and planters. One of those men was Joseph Welsh Texada who was a captain in the 8th Louisiana Cavalry and fought at Shiloh with the Crescent Regiment.

I have heard the stories of my ancestral family for years from my mother, especially, who was always very proud of her Southern heritage and of her family’s distinguished background. At Shiloh alone 23,000 lives were lost.

My ancestor survived and he went on to serve as a state representative and on his local Police Jury. His life mattered.

The nationwide move to remove all Confederate symbols, monuments, history is simply appalling to me. Joseph Welsh Texada's life mattered and so did the lives of the 23,000 lost at Shiloh and the thousands at other battles.

In New Orleans, Governor Mitch Landrieu has won yet another battle to remove four iconic Confederate monuments in the city. Wednesday, January 27, an Orleans parish judge denied a request to halt removal of the monuments and the Fourth Circuit Court of Appeal upheld the decision the next day. And so the battle now moves to the Louisiana Supreme Court in what will be the last chance. Until all appeals are exhausted, a group supporting monument preservation is continuing to collect signatures on a petition which currently has over 28,000 signatures. The large majority of NOLA residents is strongly against the removal.

New Orleans is, of course, not alone in this fight. All across the nation history is being erased. There’s even been a move to remove the stained glass windows commemorating Stonewall Jackson and Robert E. Lee from the National Cathedral in Washington. It's also happening in Birmingham, and Atlanta. The University of Texas removed their statue of Jefferson Davis last year.

Many on the side of removal have suggested that these statues and monuments be placed in a sort of interactive historic park where people can still see them and learn about the history. This guy, for example, suggest that these "objects of hate" be put into a park similar to Memento Park in Budapest where images of Stalin, Lenin, and Guevara can be seen "in their proper context." My concern with that is who decides what the proper context is?

I object to Robert E. Lee or Jefferson Davis being classified as an "object of hate" and in the same class as Lenin and Stalin. Quite a difference, I think. If that's the way these people view the Confederate generals, I have concerns about them writing "the proper context" for this suggested park.

Again I ask, where in the world does this stop? Thomas Jefferson had slaves: shall we tear down Monticello? What of all the grand southern plantations still standing along the Mississippi River and throughout the South? Shall we raze those and put up condominiums in their place? Maybe we better stop the annual pilgrimage in Natchez.

It all just defies logic.

It makes me sad.

It makes me want to fight harder to preserve my own heritage.
Posted by Pat Austin Becker at 10:41 AM

Logic is the opposite of what is happening in all of this. Visible history is one more "front" in the war on American ideals, and as we see, none of our leaders are any more willing to recognize it or stand up against it than any other aspect of our culture. They stand idly by, or even help destroy all memory of any kind of honor, and in the process abet the destruction of language in which to even talk about it.

"A country without a memory is a country of madmen."
George Santayana

Just saw Adrienne's link and had to comment on this sad situation in your state. It's a malicious and hateful thing being pushed by people who don't care about history or anything but their own twisted agenda. I truly hope LA/MS folks can drive this back.

And on a different topic, thought you'd appreciate this. Stolen from Wirecutter, I think.
https://gruntofmontecristo.files.wordpress.com/2016/01/doghotel.jpg