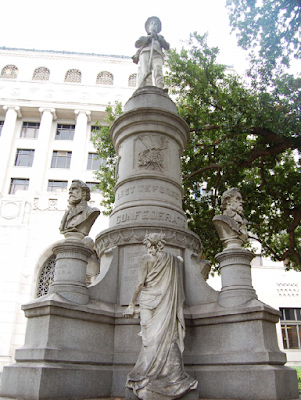 The youthful soldier stands at rest, facing north; his face is "handsome and sensitive, with a slight trace of bewilderment in it."  Perhaps his confusion centers on the conflict swirling around him, on the animosity and anger, or maybe he is attempting to understand how 150-years later, we are still such a divided country.

At issue throughout the South is the manufactured outrage over decades old Confederate monuments.This brouhaha has been roiling New Orleans under the mayoral term of Mitch Landrieu; it has erupted in Memphis,  in Louisville, and let's not even begin the discussion about the battle flag.  Now it has come, once again, to Caddo Parish.

The Confederate monument that stands in front of the north side of the Caddo Parish Courthouse has been challenged  this time by Caddo Commission member Ken Epperson.  The NAACP called for removal of the monument in the past and the issue dissolved into limbo when it was (once again) determined that the 400 square foot parcel of land the monument stands on belongs to the Shreveport Chapter of the United Daughters of the Confederacy, given to them for use in perpetuity back in June, 1903. The Caddo Parish Police Jury (the forerunner of the Caddo Commission) donated not only the land but $1,000, or ten percent of the funds needed to pay for the monument, to the UDC.

After the end of the Civil War, it fell to the women across the South to bury their fallen sons, brothers, and husbands and to commemorate those who were buried in unmarked graves in places unknown.  Across the South, women banded together in memorial associations, such as the United Daughters of the Confederacy (founded in 1894), for they had a common purpose. By the time our Caddo Parish monument came into consideration in 1903, the second phase of Civil War commemoration was underway and monument building was prevalent.

Despite what the NAACP might tell you, the original intent was not to perpetuate division and celebrate conflict. The primary purpose of these monuments constructed during this second phase (1883-1907) was to not only memorialize the fallen but to educate those in the future who may not have the same "emotional and personal ties" to the war.  The figures on these monuments had no overt political message or content -- something the NAACP and the uneducated liberals might be interested to know.

Because public citizens donated money for the construction of these memorials, it was then believed that these memorials should be a subject of civic pride "to be displayed in conspicuous places" like courthouses, public parks, and cemeteries.  Local historian Eric Brock wrote in the Forum Magazine in 2006:

For many [Confederate soldiers] in unmarked graves around America's battlefields, it is a symbolic tombstone, a sacred place that should forever stand and be respected. Those who forget their history, it has been said, are doomed to repeat it. Worse yet are those who deny history, for they doom civilization itself.


Attempting to erase, or sanitize, or revise, history by dumping hundreds of thousands of dollars to move hundreds of monuments into warehouses or dry museums is cowardice. It is to deny the sacrifices of men who sacrificed and fought for what they believed was their sacred honor -- their homes, families, and their state's rights.  The issues that divided the nation then divide us still only because there are those hate mongers and poverty pushers like Al Sharpton and Jesse Jackson who make their living and line their pockets off our being divided.

Many thousands of the men who risked their lives and spilled blood to defeat the Confederacy would be appalled. Abraham Lincoln would see the malice toward all, the charity toward none. Ulysses S. Grant would be shocked at the notion, for example, that Pickett’s Charge represented “false valor,” and the great warrior-abolitionist, Joshua Chamberlain, would be disgusted at the thought of digging up Confederate bones to make a political statement. But why take any guidance from Union heroes when determining how to remember the past? After all, tweeters and Facebookers know so much more about right and wrong, about justice and injustice. After all, they’ve spilled their own online blood, and they have the hate-tweets to prove it.


It would take a dim mind indeed to believe that once the Confederate monuments are all gone that our roads will smooth out, the paint will stop peeling off the walls in our crumbling schools, criminals will put down their guns, and drugs will only be used for healing.

Perhaps Ken Epperson and Lloyd Thompson, and their ilk, should take some art history classes, step back and admire the artistic masterpiece that Texas artist Frank Teich created for us.  Not only does 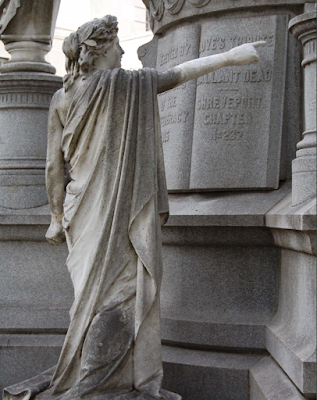 our monument have the young, bewildered soldier, but there are four busts of Confederate generals carved from Texas granite.  And most unusual, and not seen on other Confederate monuments, is the full sized figure of a woman, the Roman goddess of history, Clio, who is writing the names of the Confederate dead in a book of history.  She is lovely.

Our monument is one of the most beautiful Confederate monuments in existence. It was installed in 1906 with thousands of people from Shreveport and Caddo Parish in attendance. It was placed on the National Register of Historic Places in 2013, the application for which can be found here and from which I have consulted for some of this background.

As it stands now, discussion about the future of the monument has been scheduled for June 9 when it will move before committee chaired by Mario Chavez who said yesterday:


"We have removed it from the agenda tomorrow and it has moved into my long range planning committee. We will have open discussion on June 9th at 1300 in regards to this topic. You better believe I plan on keeping it exactly where it is."

If you feel so inclined, you are welcome to attend the meeting, fill out a speaker card, and have your three minutes to speak before the Commission on the matter.

Local attorney Henry Walker was at the meeting this week and he expressed his concerns that the monument "could possibly affect a trial because of its "implied subject matter."  What would that implication be, Mr. Walker?  What exactly is implied by this monument of Confederate generals, military men of respect and honor, men of value and integrity?  Men of courage.  Men who stood up for their families.  What is implied by a lone woman writing in a book of history?  What is implied by a non-confrontational, bewildered young man?  Mr. Walker told the Commission that the monument is just a bunch of concrete.

That might be the most revealing quote yet.  What exactly is threatening about a bunch of concrete, Mr. Walker?

In past attempts to remove the monument, the NAACP suggested replacing it with a monument for law enforcement officers killed in the line of duty -- even though we have one of those three blocks away. Now the suggestion is that we erect a monument to the USS Golet -- a submarine lost at sea during WWII which was financed with War Bonds, some of which were purchased in Caddo Parish and there was one Caddo resident aboard.

Here is the KTBS story of the meeting this week.  Here are the minutes of the Work Session this week.

It seems to me that in the end, preserving our past is the only way to protect our future.  Just as we can't wrap our children in bubble wrap and expect them to negotiate the travails of this world unscathed, we can not sanitize or revise history.  Sometimes that takes resolve and sometimes it is painful, but always it takes courage.  These times of division that we now find ourselves in, more so than ever before, will take courage and all of us pulling together to overcome the closed minded people who want to perpetuate division and discord among us for their own gain.